RFF recognizes “See,” “This is Us,” “Spare Room,” “Atypical” and “The Politician” for authentically casting actors with disabilities

Boston, June 2020 – Amid growing momentum for the inclusion and authentic representation of people with disabilities in Hollywood, the Ruderman Family Foundation today announced its latest accolades for entertainment productions which meet those standards.

For the fourth time, the Foundation’s Seal of Authentic Representation award is recognizing films and television series which demonstrate a commitment toward full inclusiveness in popular culture. The current group of honorees includes:

“I am grateful to the Ruderman Family Foundation for its steadfast commitment to disability inclusion in entertainment, and I thank the Foundation for recognizing ‘The Politician’ with its Seal of Authentic Representation,” Ryan Haddad said. “Series creators Ryan Murphy, Brad Falchuk, and Ian Brennan set out to populate the world of their satirical high school with a variety of voices without calling attention to it in the scripts. It’s been a privilege for me to inhabit their story and their words. This kind of disability inclusion is refreshing, truthful, and necessary. We exist in the world, we can be part of any story, and those stories need not be laser focused on our disabilities in order for us to play meaningful roles.”

“It is incredibly important for the entertainment industry to authentically cast characters with disabilities,” Blake Stadnik said. “Not only does it deservingly give work to some of the most talented actors I know, but it also influences the audience’s perception of disability as a whole. Personally, it would have been beyond meaningful to see a person with low vision play a character like Jack when I was growing up. I am honored to possibly be that for someone now, and I am so proud to be a part of a show that wants to authentically represent everyone’s story.”

“From the moment I auditioned an actor with Down syndrome to this day, I was changed as an artist and moved by each actor’s family and commitment to their child’s efforts,” said “Spare Room” director Jenica Bergere. “For them, the part was a rare opportunity, and the discipline and effort everyone put forth would put some Hollywood actors to shame. The opportunity to tell stories that are inclusive of actors with Down Syndrome; actors that are female and over the age of 40; actors that are Persian, Asian, black, brown, transgender, white, old, and just plain authentic to the world we live in, is an opportunity I actively seek and yet it’s still hard to find.”

“Thank you so much for presenting SEE with the Seal of Authentic Representation. From the very early stages in developing this project, we were determined to build a post-apocalyptic world that would portray an authentic perception of a much-reduced civilization without sight. This idea fed into every creative choice we made throughout production, but would not have been either possible or respectful without the inclusion of our blind and low-vision cast members, like Marilee Talkington, Bree Klauser and creative partner behind the scenes, Joe Strechay,” said Director Francis Lawrence. “It was a very fulfilling experience and it’s my hope that future productions will be more encouraged to incorporate the blind and low-vision community on their sets regardless of the story being told.”

“I appreciate that Hollywood is making sure that people with disabilities are included in portraying their own disabilities,” Layla Weiner said. “For ‘Atypical,’ I not only loved being able to act as someone on the spectrum but also to play someone who is a person of color with a disability. Although it is a good start for Hollywood to finally include us, more in the area of inclusion of people of color with disabilities needs to happen.”

The Seal of Authentic Representation is awarded when productions meet two criteria: they feature actors with disabilities with a speaking role of at least five lines; and they are in, or on the verge of, general release. The Foundation announces the honor whenever a film or TV series meets those standards. The previous round of honorees included the TV series “Tales of the City,” “General Hospital,” “Years and Years” and “Loudermilk.”

“We are gratified to see the ongoing progress in the realm of authentic representation in entertainment, including from the latest recipients of our Seal of Authentic Representation,” said Jay Ruderman, President of the Ruderman Family Foundation. “At the same time, we hope that these recognitions continue to inspire broader institutional change in Hollywood, motivating more producers and directors to not only audition but eventually cast actors with disabilities — especially in the roles that they are uniquely qualified to play. For far too long, disability has been glaringly left out of Hollywood’s conversation surrounding diversity, and inclusive and authentic casting decisions play a significant role in righting this historical wrong.”

Read the release in Deadline. 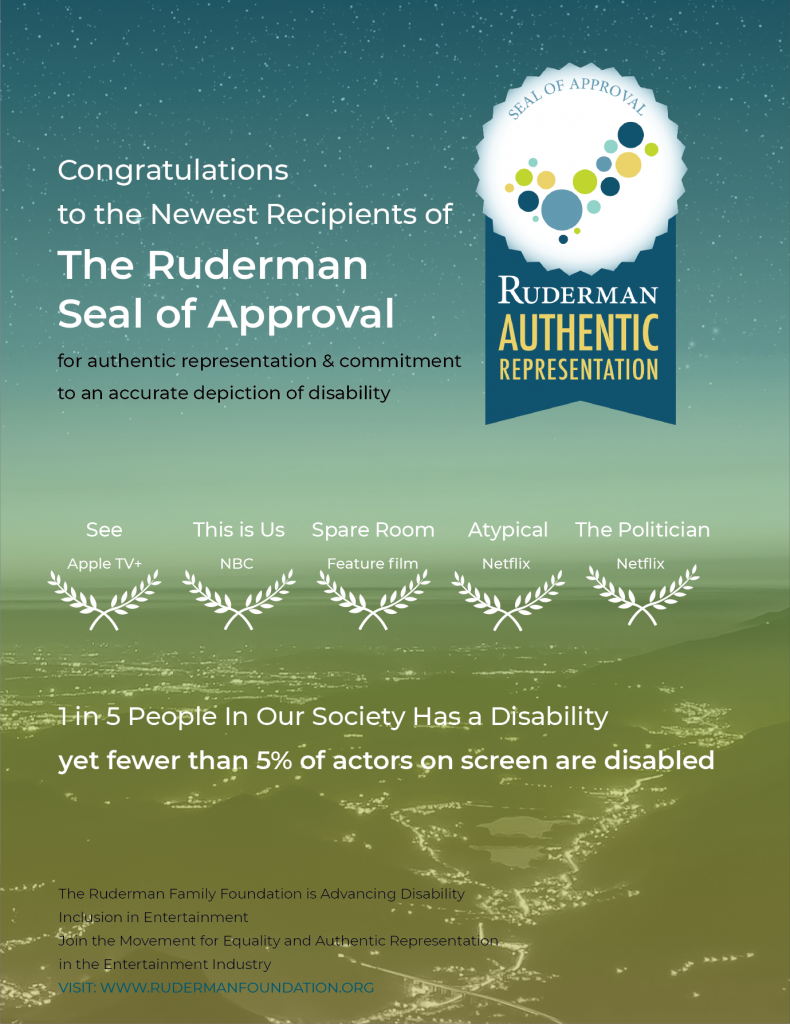