Excellence in Reporting on Disability Award

Excellence in
Reporting on Disability Award

The 2018 Ruderman Family Awards were presented in a special ceremony in Washington, D.C. “Twenty percent of our population has a disability, and people with disabilities comprise the largest minority in our nation and in the world,” said Jay Ruderman, president of the Ruderman Family Foundation. “Unfortunately, the media often ignores the disability narrative or infuses it with pity and condescending language. This award recognizes excellence in disability reporting, in order to ignite accurate and essential public conversations about disability, inclusion, civil rights, and social justice.”

Established by the Ruderman Family Foundation, the competition is the only journalism contest devoted exclusively to recognizing excellence in the coverage of people with disabilities and disability issues.

The program is administered by the National Center on Disability and Journalism at Arizona State University’s Walter Cronkite School of Journalism and Mass Communication.

The Ruderman Awards for Excellence in Reporting on Disability honorable mention prize of $500 was presented to Audrey Quinn, Aneri Pattani and Phoebe Wang of WNYC, New York public radio.

These 3 journalists created an eight-episode podcast entitled “Aftereffect,” which takes listeners inside the life of of Arnaldo Rios Soto, a 26-year-old, non-speaking man with autism whose life was upended in 2016 when someone mistook a silver toy truck in his hand for a gun. Police arrived and ended up shooting and severely wounded Arnaldo’s aide, which set off a sequence of events that put Arnaldo’s life in a downward spiral.

This story of psych wards, physical abuse and chemical restraint challenges listeners to understand the vulnerability that sometimes accompanies disability and the inadequacy of our institutions to set things right.

Dr. Heyman welcomed our three finalists to receive their awards.

Third place in the Ruderman Awards for Excellence in Reporting on Disability and an award of $1,000 was given to Duaa Eldeib, Sandhya Kambhampati,

Vignesh Ramachandran and David Eads from ProPublica Illinois for their entry “Stuck Kids.”

The “Stuck Kids” investigation revealed that between 2015 and 2017, 21 percent of the time children spent in psychiatric hospitals in Illinois was not medically necessary. The children remained confined to hospitals because the state failed to find appropriate placements for them. 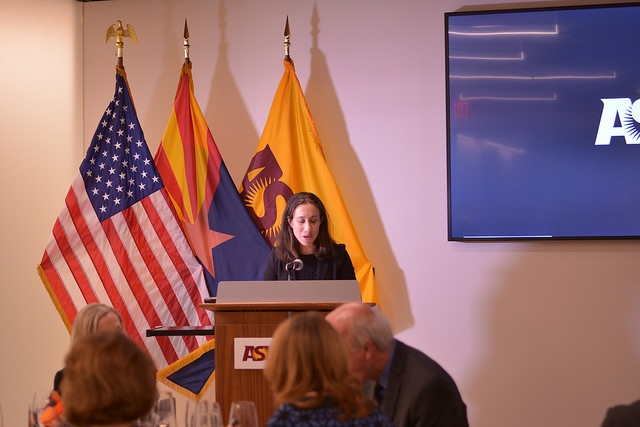 In the photo: Dr. Miriam Heyman, a senior program officer at the Ruderman Family Foundation presenting the awards.

Some children were stuck in psychiatric hospitals for months, despite evidence that unnecessarily prolonged hospital stays can have detrimental effects on children in terms of both their emotional well-being and their behavior.

Second place in the Ruderman Awards for Excellence in Reporting on Disability and a prize of $2,500 was presented to J. David MCSwane and Andrew Chavez of the Dallas Morning News for their investigation entitled “Pain and Profit”.

The two examined the way Texas treats fragile people who rely on Medicaid, the government insurance program for the poor and disabled. With the help of whistleblowers and more than 160 public records requests, the series exposed the systemic denials of care and other abuses by companies paid to administer Medicaid. The report created such a stir that the Texas legislature held hearings on the findings and is expected to enact new legislation to address the problems early next year.

“Painstaking, careful reporting drove this story to the top of the list”’ stated the judges for the contest. ‘The reporting combined compellingly, sensitively told personal stories with the policy issues at hand.”

The first place prize of $10,000 in the Ruderman Awards for Excellence in Reporting on Disability was given to Joseph Shapiro, Robert Little and Meg Anderson from National Public Radio for “Abused and Betrayed.”

This NPR series examined a hidden epidemic, revealing that people with intellectual disabilities are sexually assaulted at rates seven times those of people without disabilities.

The NPR Investigations Team spent more than a year sifting through court records and interviewing victims and family members. They found that crimes against people with intellectual disabilities often go unrecognized, unprosecuted and unpunished, leaving the abuser free to abuse again. The investigation also included a first-ever analysis of federal crime data and tracked what states are doing about the issue.

The last segment of the series was devoted entirely to giving people with intellectual disabilities a voice. In this segment, the victims spoke movingly about what had happened to them and how it had affected their lives.

“Among a collection of many excellent contenders, this entry stood out head and shoulders”, declared the judges. “NPR devoted thorough, sensitive reporting on a long overlooked issue and people who often are unable to say #MeToo for themselves.”

Prior to the award ceremony, Dr. Heyman led a workshop for 25 journalists on how to improve disability coverage where she presented our white paper on media coverage of the murder of people with disabilities.

For the Ruderman Family Foundation, inclusion and understanding of all people is essential to a fair and flourishing community. We congratulate all

our winners and wish to see wider reporting about disabilities in the media in the coming year.