The Biennial Symposium for Professional Community in Israel

The Biennial Symposium for Professional Community in Israel is held every two years at the Peres Center for Peace Jaffa. The seminar convenes the professional community that operates around common issues relating to the mission of strengthening the relations between Israel and the American Jewish community. Hosted by the foundation, the seminar invites professionals from organizations working among senior leadership in Israel and serves as a unique opportunity to share knowledge and create cooperation between members of the community working towards this common goal.

The Knesset Caucus for US-Israel Relations

The Knesset Caucus for US-Israel Relations, established in 2013 and chaired by MK Mickey Levi (Yesh Atid) and MK Keren Barak (Likkud), serves as a dynamic platform for open and candid conversations on relevant and controversial issues on the agenda of the relationship triangle between Israel, America, and the American-Jewish community. As a central address for all related issues in the Knesset, the caucus aims to elevate the concerns of American Jews within Israeli deliberations and aspirations. The caucus meets two or three times a year.

The Ruderman Conference for Israel-American Jewish Relations assembles senior Israeli leadership from all realms of society: government agencies, security networks, academia, media, philanthropy, business, public organizations, and other partner foundations for collaborative discussions on the strategic relationship between Israel, America, and the American Jewish community. The conference convenes in Israel and features speakers of high political stature from Israel and America, leaders already invested in this issue and those from across professional disciplines, in order to expand and develop future public work in the area of Israel-American Jewish relations.

The Ruderman Journalist Mission leads a delegation of Israeli journalists who represent a variety of media outlets to New York for a week of educational tours about the history of the American Jewish community. The journalists learn about Jewish-American opinions on Israel – both past and present – by engaging in discussions with senior researchers, leading American philanthropists, activists, students, media professionals and thought leaders from Jewish organizations, heads of Jewish movements, Jewish community newspapers and major American news publications.

The Ruderman Knesset Mission is a flagship program designed to educate Israeli political leaders about the American Jewry and the strategic importance of the relationship, and cultivate a stronger dialog with the leadership of the community. During a weeklong tour through New York and Boston, MKs deepen their understanding through personal interactions with leaders, researchers and activists who represent a diversity of voices and opinions, as well as participating in conferences, tours and events. Upon their return, MKs join a network of former participants, receive updated and relevant information from the foundation, and are encouraged to continue to engage with the issue within and without the walls of the Knesset.

The Ruderman Press Network serves as a platform for Israeli journalists and communications professionals, including alumni of journalist missions, to connect with their colleagues in the Jewish press in Israel and America. Members convene at events and seminars, and regularly receive content published by the foundation: books, studies and surveys, reports, data and other publications on the subject. The development of this network has sparked an increase in informed public conversation about Israel-American Jewish relations in Israel and the United States.

Civil Forum at the Presidents House

The Ruderman Family Foundation, under the auspices of the President’s House, and in partnership with Gesher and the Ministry of Diaspora Affairs, hosted the ‘Civil Forum’ – a large encounter of senior officials from Israel and the United States, The encounter brought forward new, diverse and different voices to the discourse on the importance of the relationship between Israel and the Jewish community in the United States. The event was attended by over 200 people, who enjoyed an evening  that highlighted the wide range of issues in which Israel and American Jews can cooperate and learn from each other, not by canceling the differences between us – but by emphasizing the what unifies us and brings us together. 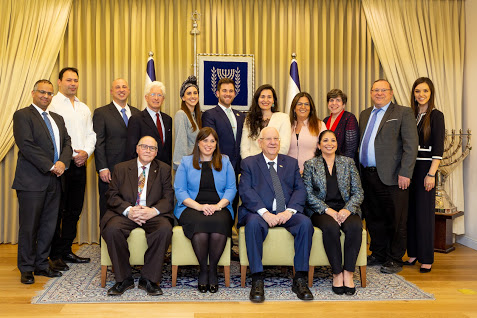 Links to the project:

A special broadcast in partnership with Makor Rishon newspaper ahead of the 2021 presidential inauguration.
The Ruderman family foundation co-hosted a special broadcast together with ‘Makor Rishon’ Newspaper on the triangle of relations between Israel, the United States and American Jewry. We enjoyed the presence of prominent experts and analysts, who provided their insights on the issue. We discussed the expected political changes with the change of administration, the opportunities facing the State of Israel and the possible impact on the relations between the Israel and the American Jewish community. Guests include: Jodi Rudoren (Editor-in-Chief of the Forward), Prof. Gabriela Shalev (former Israeli Ambassador to the UN), Ron Kampeas (JTA’s Washington bureau chief), Michael Eisenberg (managing partner at the Alef Foundation and author), Yaakov Katz (Editor-in-Chief, The Jerusalem Post), MK Tehila Friedman (Blue and White) and of course Jay and Shira Ruderman, our president and executive director.

Being an American Jewish Student, a social media series initiated by the Ruderman Family Foundation, in which Jewish students from across the United States share their experiences on campus, in the face of anti-Semitism and anti-Israel harassment, as well as their feelings and thoughts about their Jewish identity. The project includes seven short videos, each featuring a student on a different campus who openly talks about their Jewishness and the challenges they face as a Jewish student in 2019.

Being Jewish in America: a video project focusing on the smaller, less-known Jewish communities across the US, most of which are not familiar to the Israeli public. This social media series includes six short videos, each focusing on different Jewish communities in several states: Alaska, Virginia, Hawaii, Texas, and South Carolina. The video participants share their experiences as members of a small Jewish community, their struggles, anti-Semitism, and their life experience in their state.

In the Media IAJCR English (1)