Children with Disabilities Need Exercise Too ﻿
Skip to main content

Children with Disabilities Need Exercise Too

Children with Disabilities Need Exercise Too

The current trend in lamenting the “good old days” seems to always include the complaint that children aren’t playing as much as they used to, especially not in the outdoorsy, physical way. While it’s tempting to dismiss statements like these, the Centers for Disease Control and Prevention report that childhood obesity has doubled in the last 30 years, and among adolescents it has quadrupled, putting more children at risk of cardiovascular disease among others. But if we look more closely, this growth in midsection is not affecting all children equally. Children with disabilities are “38% more likely to be obese than their counterparts” according to AbilityPath.org. These are precisely the children that due to the lack of adaptive equipment on playgrounds, and due to a competition-based model of group play all too frequently don’t get to play outside at all.

This is of course a problem, but before I go on, I have to make one thing clear: just because someone looks obese or overweight doesn’t mean they are unhealthy. We too often conflate appearance with health and happiness and the last thing I want is for this blog to be used as fodder for fat-shaming children and parents. There are obese people who are at no risk of increased cardio-vascular problems or increased all-cause mortality. This is known as metabolically healthy obesity and is a good reminder to not pretend to know someone’s health profile if you’re not their doctor. 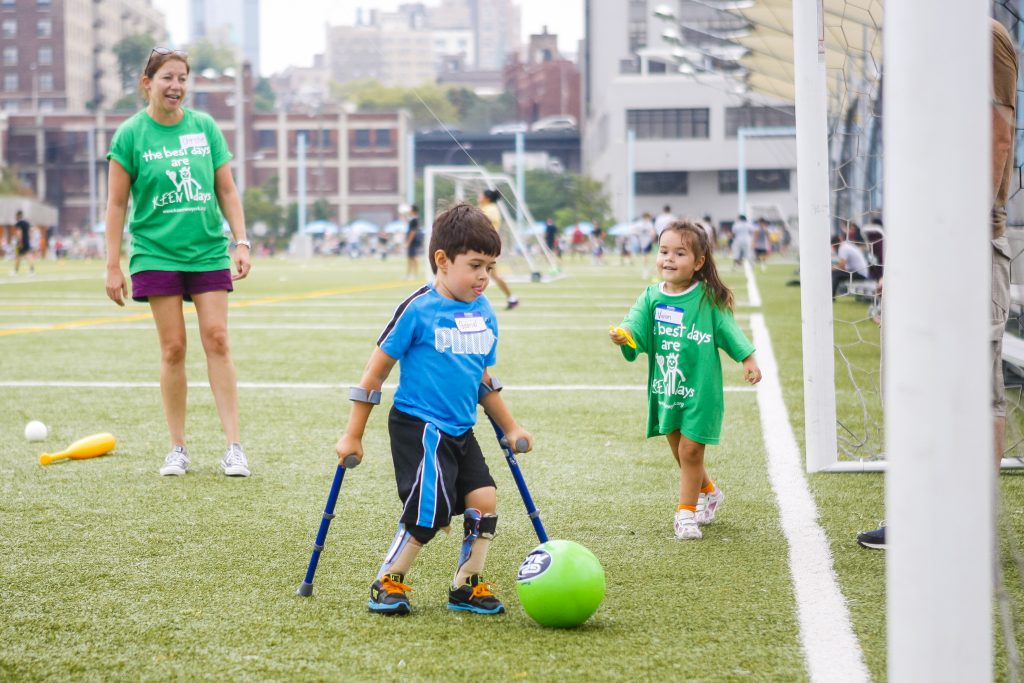 Gabriel, a KEEN athlete, having fun at one of the KEEN sessions (photo credit: KEEN USA)

With that said, exercise carries with it significant benefits that extend beyond physical health such as increased self-esteem, skill improvement, and simply fun. Yet so many children with disabilities do not have the opportunity to exercise—something that able-bodied children frequently take for granted. KEEN USA is addressing this inequality.

KEEN stands for “Kids Enjoy Exercise Now” and is a truly extraordinary and completely free program that pairs trained community-volunteers with children and adolescents who have developmental and physical disabilities. Children as young as 4-5 and young adults up to 21 years old meet for one-on-one exercise sessions that are tailored to the child’s ability level. “We are filling a gap so we can serve the hardest to reach populations. We turn no one away,” said Joanna Winsborough, the National Development Director when I spoke with her. “We are very able to get volunteers and we always have the 1-1 ratio. But we’ve had 2-1 ratios for people who needed it. … In our LA affiliate we had an athlete who had never been down a slide. Because we were able to pair her with three volunteers, she was able to go down the slide.” This non-competitive model ensures full participation of everyone and doesn’t require an understanding for the rules of any sport. And you can take a look at what this model looks like in this video.

In 2014 alone KEEN recorded 34,100 volunteer hours across 6000 volunteers, had 1100 athletes (kids served), and ran 62 programs through 7 affiliates located across the country. What’s evident in these numbers is the immense community involvement that the KEEN programs generate. “We’re very proud of the amount of volunteers we train,” said Winsborough. It is a way for KEEN to truly educate the wider public about inclusion. The volunteers “go back and share the information they learned and it makes the community a smaller place. It makes the kids be included.” Although the athletes can only be served until they are 21, Winsborough explained that occasionally they will have some graduates return to the program as volunteer coaches.

One aspect that makes this community cohesion so successful and so replicable from New York to San Francisco is that each KEEN affiliate branch develops programs that reflect the interests of the community’s population. For example, “in San Francisco they have KEEN Yoga,” said Winsborough. “Most have KEEN swim, especially in the summer and [the affiliates] add whatever the community in that area really wants.” And for those kids who just aren’t up for exercise on a given day? “We offer an art room with art supplies” so that they can still participate and socialize and develop their skills.

Although KEEN is not a therapeutic program, their outcomes are a testament to the power of exercise. “We’ve had … an athlete who wasn’t ready and didn’t have the confidence to join a Special Olympics swim,” said Winsborough. “But after KEEN, they left and were able to join.” It is this kind of empowerment that kids with disabilities need to have greater access to. It is this kind of empowerment that will improve self-confidence and ultimately contribute to their overall health. So it is my sincerely hope that KEEN will take root in more and more cities and that communities everywhere will create greater access to exercise opportunities for children with disabilities.