The Ruderman White Paper: Voting Accessibility For People With Disabilities 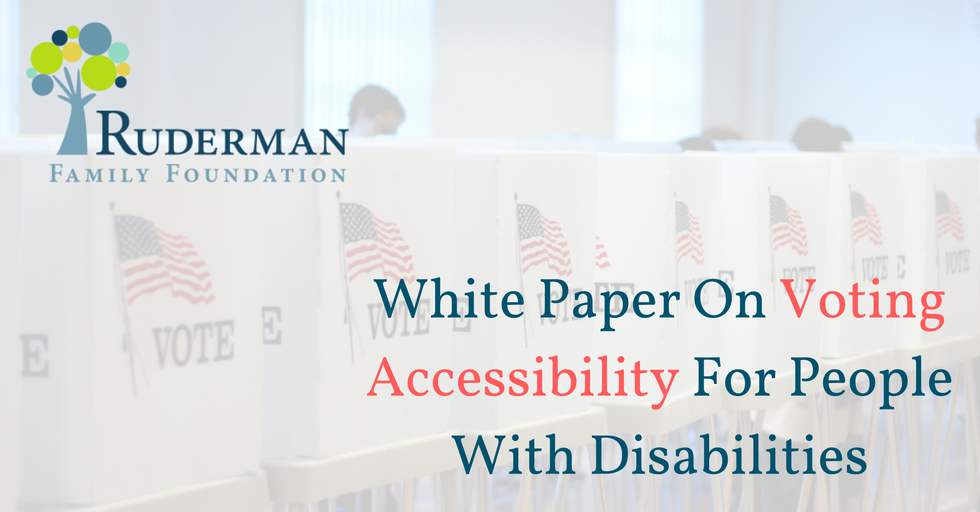 The Ruderman White Paper: Voting Accessibility For People With Disabilities

THE RUDERMAN WHITE PAPER:
VOTING ACCESSIBILITY FOR PEOPLE WITH DISABILITIES

We are less than two months away from the 2016 presidential election. Given that there is no quantitative data yet on the accessibility of this election, our approach in this white paper is a qualitative sampling of top experts in the field of disability voting inclusion. We aimed to get a sense of the progress the U.S. has made as well as the problems it still faces. We have interviewed a total of ten experts in the field. The majority of them were experts on U.S. elections and a few were in the field of monitoring election fairness abroad. In this way we were able to get some sense of comparison with other countries. However, the key focus of the interviews was on voting accessibility in the U.S.

Voting is a sacred trust in a democracy, and it is an obligation of society to make it accessible to all eligible citizens. To better understand the obstacles that are creating this nationwide problem and to identify ways to remedy them, we interviewed seven national and three international experts on election administration and accessibility.

We have identified five primary recurring barriers to voting accessibility for people with disabilities:

In all these cases, the experts contended that we know and have the solutions to the problems and need to ensure rigorous implementation.

Many election officials and policymakers say they can solve the accessibility issues through actions that simply circumvent the barriers. Most frequent examples of such policies were relying on absentee ballots for people with disabilities rather than making polling places accessible, and relying on giving people with disabilities assistance with casting their ballots, which fundamentally compromises their right to a private and independent ballot. We do not find these adequate solutions in any way.

A final barrier we examined was the treatment of people with intellectual, developmental (IDD), and psychological disabilities (PD). The U.S. compares relatively favorably to other Western countries in its inclusion of all its citizens, with one marked exception. While the trend in the rest of the world has been to move away from provisions that disenfranchise people with IDD or PD, more than half of U.S. states still have such provisions in their constitutions. Some states also disenfranchise person placed under guardianship. There is no evidence that such measures are reasonable or called for and as they stand, they constitute overt and systemic discrimination.

It is unacceptable to have 20% of our population being treated as second-class citizens with their rights to full participation in our democracy being routinely compromised. It is the duty of our democratic system to end this institutionalized discrimination against people with disabilities and focus on ensuring that each citizen has guaranteed access to a private and independent ballot in whichever manner they may choose to cast it.