The Jewish Vote: Political Power and Identity in US Elections 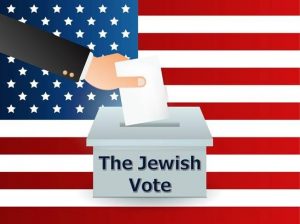 The Jewish Vote is a story of the great, mutual, love affair between America and its Jews, rooted in American exceptionalism.

In this report, Professor Gil Troy, visiting professor at the Ruderman Program for American Jewish Studies at the University of Haifa, addresses the disproportionate frenzy surrounding “The Jewish Vote” during the 2016 US Presidential election.  Since the 1930s American Jews have been woven into the fabric of the American political landscape. From civil rights to women’s rights, Jews have been on the frontier of liberal political movements, spearheading social reforms and shaping American policies from within. Troy posits that there has been a Jewish vote – a solid, stable, liberal Democratic majority, usually in the 70-percent range in elections since 1928. It rarely affects the national outcome but it does reflect the American Jewish mentality. In so many ways, the liberal Democratic Jews who constitute the Jewish vote are living and expressing the new Jewish consensus.

This is the story of the American Jewish vote – a story of contradictions and confusions, of frustration for the right and inspiration for the left, a story, ultimately, about cultural identity and shared fears more than political stands or personalities. To dive into this story, read the full report: