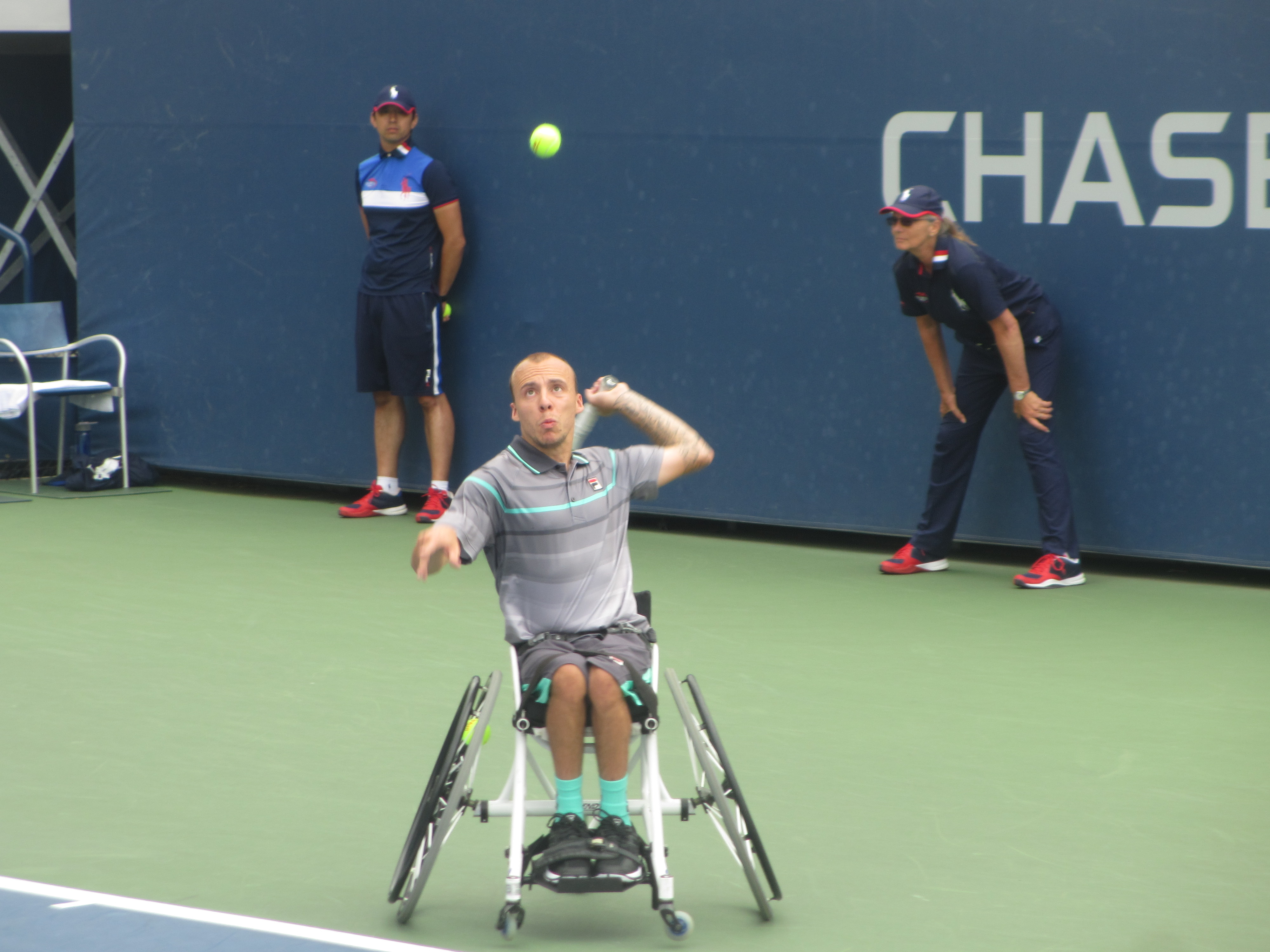 For most tennis fans, the highlight of the 2015 U.S. Open was the anticipation and excitement around Serena Williams possibly winning the Grand Slam—all four major titles in a calendar year–for the first time since Stefi Graf accomplished this feat in 1988. For me, the highlight occurred on the last Friday of the tournament, when both women’s semifinals matches were played. A great deal of attention was focused on Serena’s shocking defeat to Roberta Vinci. 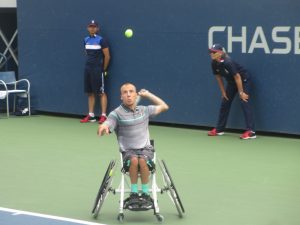 For those unable to get inside Arthur Ashe Stadium to see the Simona Halep/Flavia Pennetta semifinals match life, it was being projected on the giant screen outside of Ashe Stadium for hundreds to see. On an equal size screen, the Shingo Kunieda vs. Joachim Gerard semifinals match from Armstrong Stadium, and the Michael Jermiasz vs. Nicholas Peifer quarterfinals match from Court 17 were also being shown. Who in the world are these tennis players? They are admittedly not household names like Djokovic, Federer or Williams. They are championship wheelchair tennis players, getting the respect and honor they deserve! Kunieda, from Japan, is the #1 seed and Feifer from France is the #2 seed.

Wheelchair tennis is a serious event at the U.S. Open. Members of the media receive an official U.S. Open 2015 Wheelchair Tennis Competition Media Guide and a supplemental 20 page booklet of player biographies. The guide notes that this is the ninth year of the U.S. Open Wheelchair Competition at the USTA Billie Jean King National Tennis Center, and features 20 of the sport’s elite talents. For the uninitiated, signs on the U.S. Open grounds provide some background:

“Wheelchair Tennis began in California in 1976. Since then, it has grown to be played on six of the seven continents and, currently, there are more than 170 tennis tournaments on the wheelchair professional tour. The Men’s and Women’s division athletes have disabilities in their lower extremities only and are classified by gender. Quad division athletes have disabilities in their lower and upper extremities and are classified based on disability, not gender. It is one of the only sports in which you may see men and women competing against each other on equal terms.” 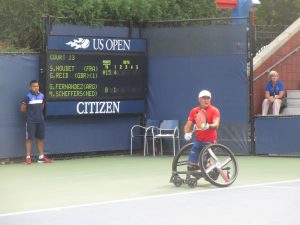 My first exposure to wheelchair tennis was in 2012 when Israeli Noam Gershony defeated the world’s #2, David Wagner. Gershony, 24 at the time, humbly told me after the match, “It is always easy being the underdog – there is no expectations and less pressure.” Each wheelchair tennis player has his or her unique story. Gershony had taken a few tennis lessons, but he was never a serious player. Gershony served as an Israeli army Apache helicopter pilot; a crash during the 2006 Second Lebanon War left him paralyzed. Early in his lengthy rehab, he was asked the seemingly unusual but very forward thinking question, “What sport would you like to pursue?” He chose tennis and went on to win several singles titles in his career. Gershony and the other wheelchair players I have watched and met at the U.S. Open are living proof that participating in sports and physical activity allows participants—with or without disabilities—to feel good physically and mentally.

I applaud the tennis world for making wheelchair tennis just another part of the U.S. Open, up there with men’s and women’s singles and doubles, mixed doubles and juniors events. I was pleased to read recent articles in a major U.S. newspaper, USA Today, which showcased athletes with disabilities who have extraordinary abilities—and participate in typical sports events: “One-handed Receiver Dominates with Speed, Spunk” (9/15/15) and “Blind Player Joins Southern Cal Practice” (9/16/16). May we continue to see opportunities of all abilities to be included in sports—the payoff for everyone is great.

Howard Blas is the director of the Tikvah Program at Camp Ramah in New England.