What I saw at The Inclusion Summit 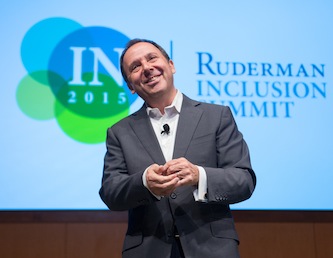 What I saw at The Inclusion Summit

0 Comments
By Shai Franklin
Next week I hope to attend the annual General Assembly of the JFNA (“The GA”) , four days of nonstop presentations and deliberations and networking (the term of art is “schmoozing”).

Although I’ve been privileged to work as a paid consultant for the Ruderman Family Foundation, I genuinely feel the Inclusion Summit was the GA of the disability inclusion movement (we even had JFNA’s top tweeter, my good friend William @Daroff, with us!). From the veterans with whom I’ve talked, it’s the first such GA, which would make it a ‘founding moment’ for a new level of advocacy.
There were the “regulars”—or better, the stars—masters of the movement, like Andy Imparato, Chava Willig Levy, Matan Koch, Michael Stein, Tad Asbury…. And there were superstars of the ‘broader’ community who believe in the movement not out of sympathy, because they realize we all benefit from inclusion; not because of their disabilities, but because they are gifted and popular and inspirational by any standard—among them, progressive kingmaker Tom Harkin, marathon jurist Richard Bernstein, “based on a true story” Loretta Claiborne, NPR icon John Hockenberry, A-list author Ron Suskind, and more. As I think about it, it was a hall filled with superstars, on stage and off.

Meanwhile, up in the Control Room…

Up in the control room, the tech professionals were also receptive to the stories and the messages being shared. (There was also some interest in organizing a comedy contest between Suskind, Hockenberry, and Keith Jones.)
I am new to the inclusion advocacy community. As befitting such a cause, I’ve been warmly welcomed. The Summit was a showcase of normality—normal people doing normal things. Normal people in wheelchairs or with seeing-eye dogs, or with hidden challenges. Normal people with hearing aids and ASL interpreters, and at least one Braille screen.

Whether by participating in the sessions or posting to Twitter, or hanging out with affinity groups, anyone’s perceived physical or verbal advantage seemed less relevant. What mattered were ideas, accomplishments, humanity. And so, normal people, more normal than many.
Unlike most large communal gatherings or political events, I didn’t see anyone wandering aimlessly, unsure what to do or why. No doubt, there are hundreds or thousands of others who could have contributed and benefited at the Inclusion Summit, and all those who were able to attend were accomplished, motivated, and purposeful. 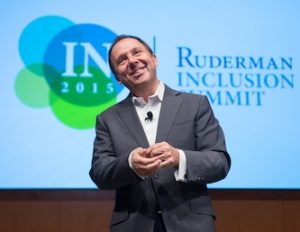 The amazing speakers on the stage were indispensable to the moment, and no less the interactive breakout sessions and the unstructured networking opportunities.
In case anyone wasn’t convinced before, advocacy for disability rights and inclusion—and for joint action—is a growth market. We all have work to do, and even though I was mostly preoccupied with keeping the lights on, still I got to witness this dynamism and momentum firsthand.
This is a movement with leaders who inspire as they listen, who demand as they share, who teach as they learn, who will never give up. 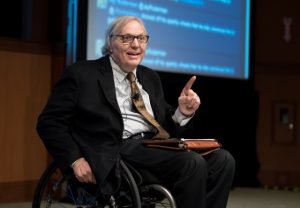 Introducing NPR’s John Hockenberry, Barry Shrage—CEO of Boston’s Combined Jewish Philanthropies, said: “What we’re doing here is to change EVERYTHING… to make the whole country a better place.” Anyone who saw the people, the content, the atmosphere of the Summit—ANYONE—would agree with Barry. And before too long, EVERYONE will.
Shai Franklin (Twitter: @ShaiFranklin), a media and advocacy consultant, has served in executive capacities with Jewish organizations in the United States and internationally.