Want to be a crime fighter? There’s an app for that. ﻿
Skip to main content

Want to be a crime fighter? There’s an app for that.

Want to be a crime fighter? There’s an app for that.

Have you ever seen someone park their vehicle in a handicap spot without a permit? Many of us have, and not only can the sight of it be infuriating, but it also leaves the question of what to do about it. You can confront the driver immediately or when they return. You can pray the traffic cop apparates via divine intervention. You can walk away. All have their pros and cons and are scenario-dependent, but what if I told you there’s now a way to eliminate this decision-making process that both safeguards your Samaritan compulsion and initiates the turning wheel of justice. I introduce to you Capester.

What do you do if you see someone parked in this spot that isn’t supposed to? (photo credit: Sierra Weiss)

Capester is an Israeli mobile app that allows the user to report everyday wrongdoings by filming and submitting legally admissible videos in complete anonymity. You do not need to talk with any authorities, no need to testify in court. Just point, click and submit. The brainchild of the app – Ohad Maislish – explains how his own experience with disability had a tremendous influence in initiating this project.

“Capester began from my personal story,” said Ohad. “I had seven surgeries and for years I walked with crutches and was in a wheelchair. Capester basically started when I had to go to a family dinner at my brother’s house and there was no parking available.” Upon arriving he saw the sole handicap spot next to his brother’s house occupied by a car without a handicap badge. 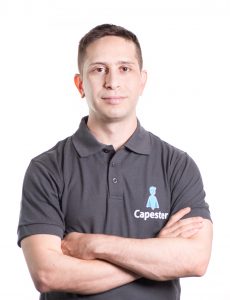 Ohad founded Capester to make the world a safer and fairer place, in particular for people with disabilities. (photo credit: Ohad Maislish)

Ohad explained that there are times when this is a common occurrence because on Friday evenings [in Israel] parking inspectors don’t work. One needs to call specially and ask for someone to come in case of an emergency, so people feel it’s safer to park illegally when inspectors aren’t around. “I saw the violation right next to me, yet there’s no easy way for me to help the authorities in order to do their job and reduce this phenomenon,” he said. “I thought, ‘Why is there no easy way? Why is this so complicated? I want to help!’ I am a citizen and just want to help make my surroundings safer and fairer.”

Investigating the reasoning as to why he couldn’t fill this much needed gap, Ohad learned that this was a case of a process that disincentivizes participation and a legal system not having caught up with technology. “At the time I couldn’t easily generate admissible evidence in court, which made the entire process very complicated. I had to go to the police station, fill out a report, identify myself, wait for the police to process the report, testify and face the defendant… That’s why people don’t do it. It’s not easy.”

He asked why he just couldn’t use his smartphone to document the incident, and the police explained that – for a number of logical reasons – this evidence wouldn’t meet legal standards to be used in court. The photo could be edited, it wouldn’t indicate the time or location recorded, and it would lack the secure chain of custody. This is when technology came in to play and changed the entire scenario. “I have a computer science background, so when they told me the issue was technological, I had an idea how to generate a platform which videos could not be fabricated.” Working with friends with technology and legal backgrounds, they spent the next one and half years creating a system that could meet the court’s standard for the aforementioned reasons. 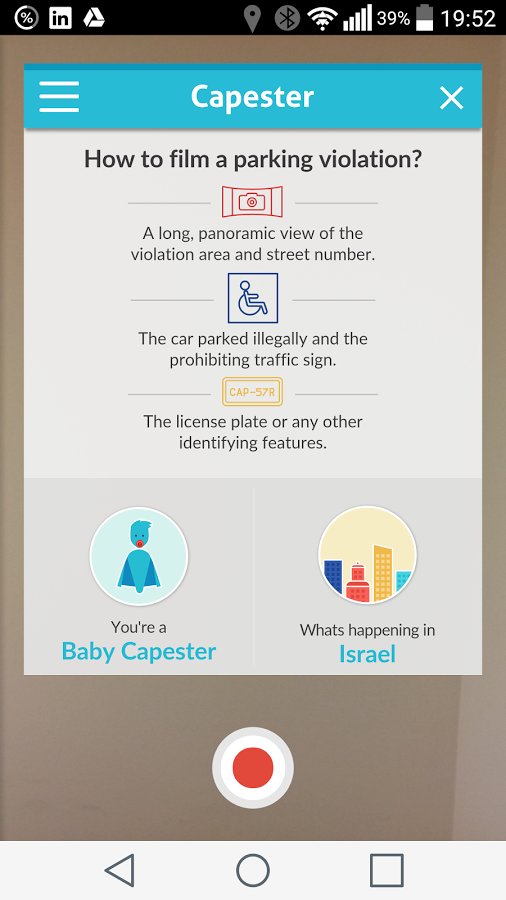 A screenshot of Capester at work on the Android platform (photo credit: Ohad Maislish)

I know what you’re asking yourself right now: when is it coming to the US?!? Don’t get too excited just yet. While Ohad hopes to one day reach our 50 states, Capester is currently operating in smaller national markets (Israel and undisclosed countries in South America and Asia) that can provide further test cases for expansion. The demand is already there, now it’ll just take time to fill the supply.

Not too bad from a man who started out as the victim and finished as the hero. Not too bad at all…

Note: Capester is presently only available in Israel

Apply now for the $250,000 Ruderman Prize in Inclusion! Click here to learn more.</str