The Utopia in Zootopia—a Model of Inclusion 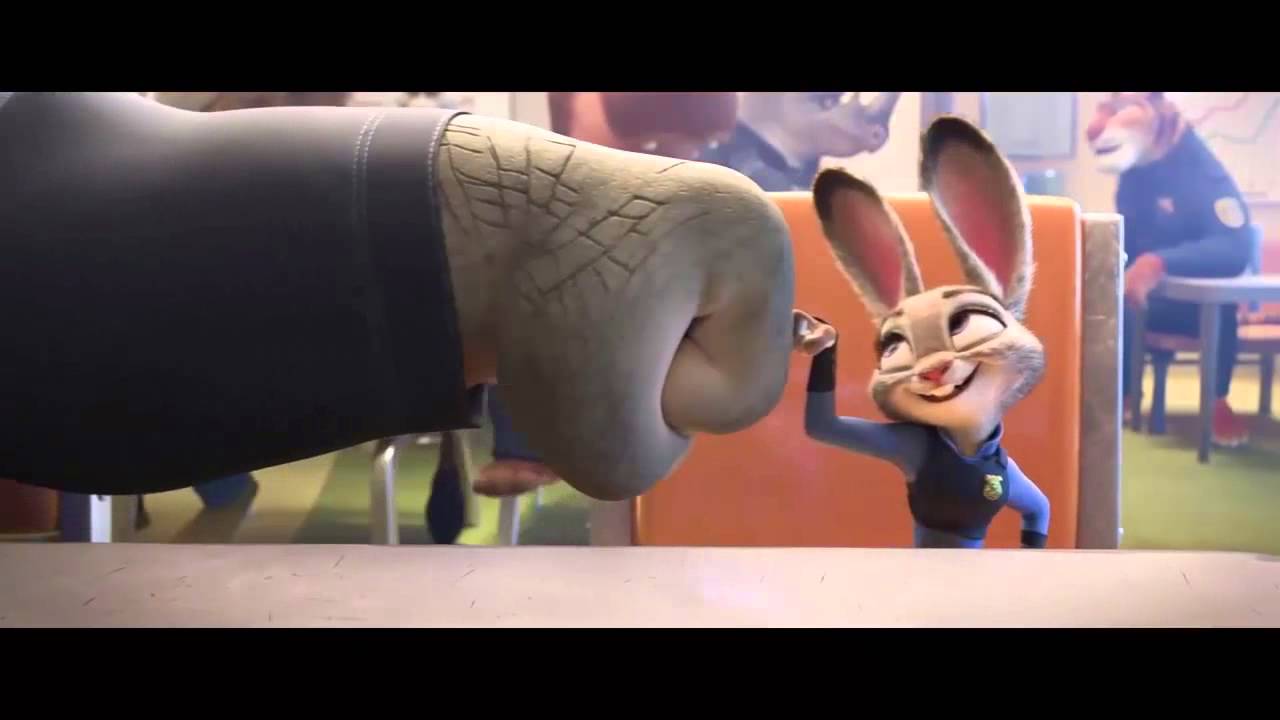 The Utopia in Zootopia—a Model of Inclusion

Last week, my partner and I upheld our long-standing tradition of watching kids movies together and went to see Disney’s latest creation—Zootopia. To give you some much-needed context, I am one of those people who, after watching a perfectly decent movie, will still point out every plot hole, world-building inconsistency, perpetuation of problematic stereotypes, and general moral failing of the movie. I mean, critical dissection and analysis of narratives is kind of still my job even after leaving academia. So I can say with certainty that this had never happened before: by the time the catchy end-credits were rolling, I turned to my partner and said, “Wow. This was a really good movie. I don’t even have any criticism.” And her jaw actually dropped open. 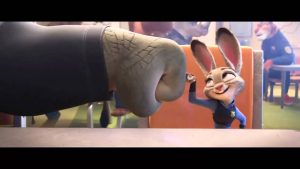 Now, I’m not saying that Zootopia is a perfectly flawless Platonic ideal of a movie—there have been several decent reviews unhappy with it, and I admit it does have a big, unaddressed plot hole—but it shines in tackling the messy topic of how to thrive in a highly diverse world filled to the brim with competing interests, expectations, histories, and biases. And within the scope of that endeavor, there is plenty to be commented on, but what amazed me the most is how seamlessly it illustrates the social model of disability, and by extension disability inclusion.

If you’re not all too familiar with the film’s trailer, the world of Zootopia is one where all mammals, excluding humans, are anthropomorphous and coexist in a civilization mirroring ours. Characters go to work, do yoga, fight with their roommates… and otherwise lead a life that Disney’s target audience can relate to very easily. Zootopia itself is a sprawling metropolis à la New York City to which the main character moves after being the first rabbit to graduate from the Police Academy and join the police force there. And it comes as no surprise that the plot revolves around her being the underdog—underbunny?—in a work place traditionally filled with much larger and stronger mammals like elephants, water buffalo, tigers, etc.

But I want to talk about the architecture and culture that even makes the plot possible. It’s never explicitly commented on in the movie, but you can probably just imagine all the accommodations that would have to exist in a world like this. What if you’re an otter in the business of selling smoothies and your customer is a giraffe towering in size to you and your establishment? What if you’re a gerbil commuting with a rhino, where death by accidental trampling would constitute a legitimate risk? Zootopia subtly, but clearly offers solutions to all of these naturally arising questions. They depict smoothie-shoots so the giraffe customer can be served and a variety of door sizes so the gerbil and rhino can exit the train safely and quickly. And that’s not the end of it. 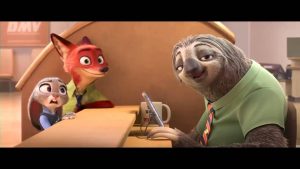 Flash is a sloth working at the DMV. (photo credit: Walt Disney Company)

What seems like simply colorful world-building is perhaps the most powerful social commentary here. If Zootopia had been a city built for otter-sized animals, the large mammals would effectively have disabilities—their bodies would not permit them to seamlessly interact with others in that society. But the movie very clearly shows that inclusion is not a matter of your body’s parameters, but rather that architecture, culture, and social organization create an inclusive society, i.e. it beautifully illustrates the social model of disability.

Whatever you may think of the plot itself (and if you haven’t seen the movie yet, I do highly recommend it), the absolutely unquestioned premise here is that every single mammal belongs in this world with full dignity. Yes, the characters do question whether a rabbit is well-suited to be a police officer—that is one of the central biases the story explores and it’s worth exploring—but what is an unquestioned given is that a rabbit belongs. Period. That is the starting point. Every rabbit belongs in the world as a productive, valued member of society. And sure, everyone over the age of 16 had a good laugh when we saw that the DMV exclusively employs sloths, but the fact remains, they too are valued, productive members of society. And in this regard, our own world sadly does not live up to that basic premise. Just replace “every rabbit” above with “every person” and you don’t land in our current reality. For example, about 20% of people in the US have a disability and only 19% of them are employed.  By comparison 68% of non-disabled people are employed.

Ultimately here is why I am so excited by this premise in Zootopia: exposure matters. I was discussing my enthusiasm with my colleague Justin (the other staff writer for this blog) and he’d mentioned what some have described as the “David Palmer effect.” In over-simplified terms, the idea behind this is that prior to the election of Barack Obama, society had already seen a dignified, respected and competent black character as a US president—such as Dennis Haysbert for the effect’s namesake on the award-winning series 24— and some scholars believe that this exposure helped facilitate Obama’s victory in 2008. In other words, the more we encounter something in our media, in our daily beliefs about the world, the more readily we embrace it. So—circling back to Zootopia—the more we see the inclusion of everyone as a given, the more it will become a reality, not merely a Disney utopia.