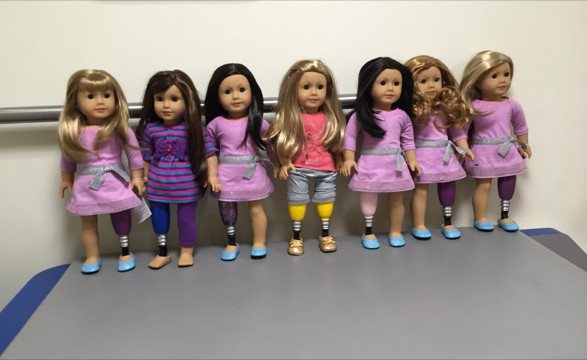 Girls and their dolls. It sounds like a cliché, but the relationship between these anthropomorphic toys and their owners is quite real and has durably stood the test of time. Even in 2016, when people of all ages are hard-pressed to escape the gaze of a screen, these priceless childhood possessions maintain the same degree of relevancy and popularity as they did during the era of radio.

An American Girl doll with customized, flower-themed prosthetic limbs from A Step Ahead. (photo credit: A Step Ahead)

Despite their timeless success, dolls can be incredibly problematic and have proven themselves so, becoming the standard by which a young and highly impressionable audience understands how they “should” psychically appear. One of the most notable examples of this is the Barbie Crisis. This brand Americana had been widely scrutinized for its portrayal of body image and ethnically homogeneous product line, but has gone through an evolution in recent years to be more realistic and inclusive. They now encompass greater diversity in their shape and color, but what about ability?

Just as it was for girls who were not white, stick-thin and platinum blonde-haired to identify with and appreciate the historical Barbie, a girl without all four limbs continues to face that quagmire. Luckily, one prosthetist became aware of this situation and decided to do something about it.

Erik Schaffer, founder and CEO of A Step Ahead, is the father of four girls. One day he took his daughters to the American Girl doll store and one of them noticed how the dolls only reflected fully-able girls possessing all four full extremities. Intrigued by the observation, Schaffer provided prosthetic limbs to the dolls of some of his younger patients who posted this wonderful gift on Facebook for the world to see. Unexpectedly, his gesture then went viral- covered by major news outlets including CNN and ABC News– and spawned an ever-increasing demand for dolls reflective of the physical status of their owners.

“We feel that it is absolutely crucial to boost the self-confidence, self-esteem and feelings of inclusion for little girls with limb loss, and something as small as a doll that resembles them can have a profound effect on their mental and physical well-being,” said Jessica Terranova, A Step Ahead’s Compliance and Legal Affairs officer. “As a kid you have so many insecurities- there’s bullying, disability isn’t always celebrated… you can lose your sense of inclusion and belonging, and you ask yourself, ‘Why does the view of beauty and normalcy not fit me?’ 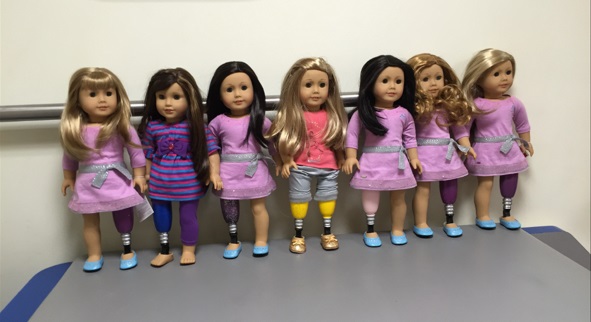 A Step Ahead creates doll prosthetics for any limb and is hand-painted in the color of the owners’ choosing. (photo credit: A Step Ahead)

The Long Island-based company (which also has offices outside of Boston and in Israel) understands the importance of this question and has expressed it through generous and meaningful action for nearly 10 years to highlight goodness in the world. Any child facing or who previously faced amputation can send in an American Girl doll and they will modify it with the respective prosthetic limb (or limbs) to match their own, as well as hand-painted the color of their choosing. The company requests background information about the child in order to send them a personalized note when they send the doll. Oh, and did I mention the only cost to the child’s family is the return shipping?!

Terranova said A Step Ahead’s primary work remains prosthetics for real people, but that this side effort is incredibly satisfying and treated with the same professionalism and care as applied toward their living patients. This sector is a genuine component of their operation as their doll prosthetics are entirely designed and fabricated on-site and alongside prosthetics for humans.

I asked if any boys had submitted dolls or action figures for this process, and Terranova said they are still awaiting that day and welcome the opportunity. So are we.

To learn more about A Step Ahead’s doll prosthetics, visit their website