Marathon to Develop Technoligcal Solutions for People with Disabilities 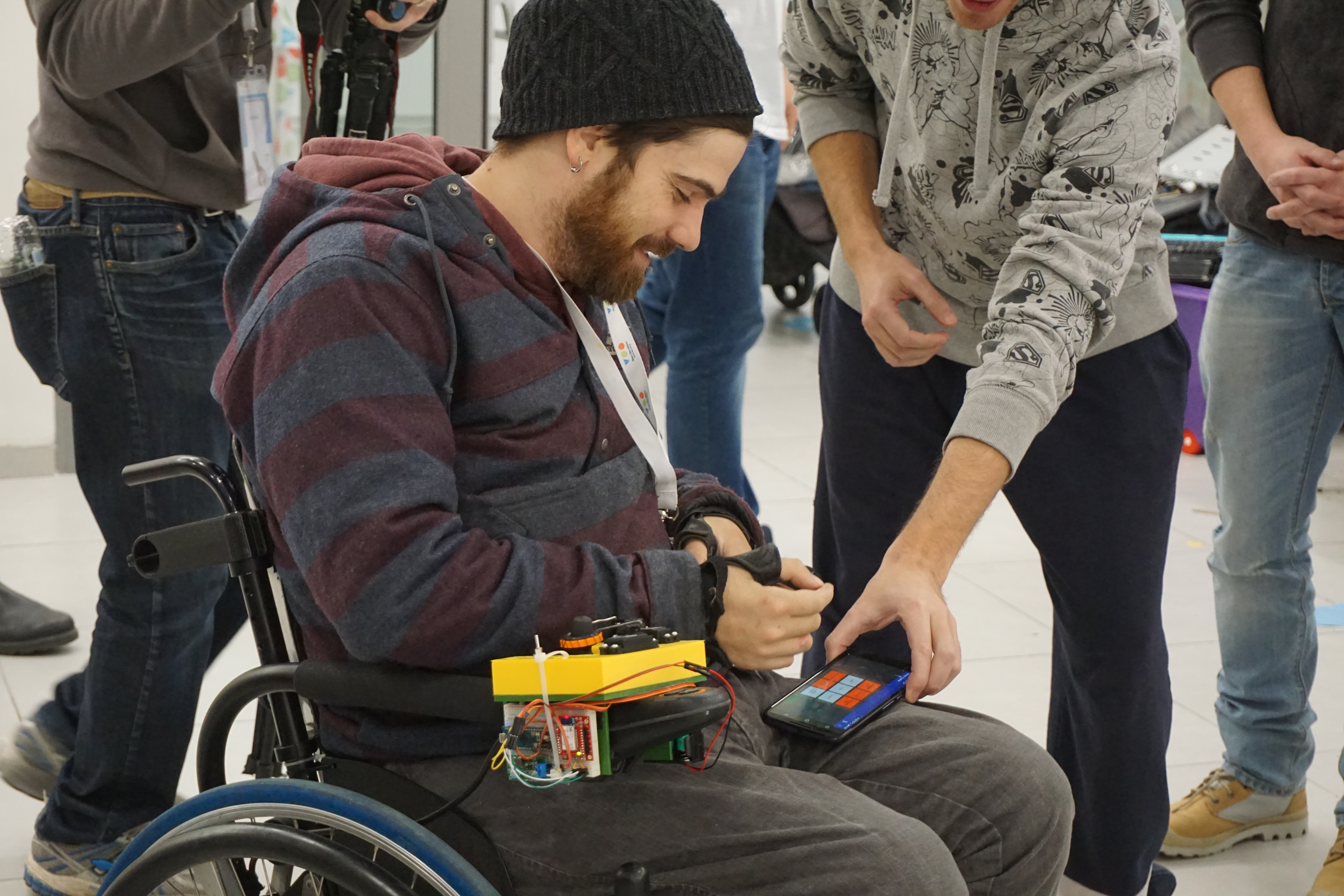 Marathon to Develop Technoligcal Solutions for People with Disabilities

I first wrote about Tikkun Olam Makers—better known as TOM—in May of last year, and titled it “How to Change the World.” Admittedly a lofty title, but not an inaccurate one. TOM is best known for organizing makeathons. As the name suggest, these are marathons of making where tinkerers and makers from all across the world come together for an intense 72 hour period in order to create ingenious solutions. Solutions for what, you may be wondering. 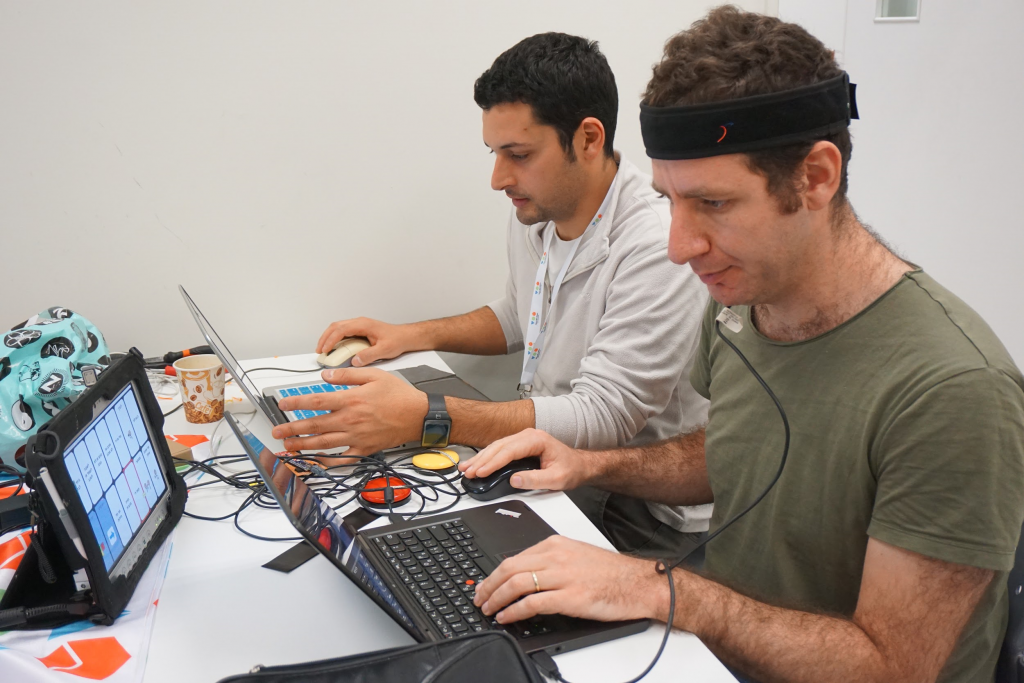 TOM is conducted by volunteers who spend an intense 72 hours designing, building and perfecting specific solutions for people with disabilities (photo credit: TOM)

Well, there are approximately 1.1 billion people in the world living with a disability. While that is a huge market, the fact is that many people with disabilities have specific needs so that the 1.1 billion number is divided into groups of 10,000 to 100,000 people who may be in need of the same product and technology. At that market size, traditional research and development models don’t become engaged because they feel there wouldn’t be sufficient profit in creating a product that only 50,000 people will buy. And this is precisely where TOM’s model of makeathons comes into play. TOM brings together makers and need-knowers—people with disabilities who would like to see technological solutions to their specific problems—and prototypes real, functioning solutions. A couple of weeks ago, the most recent makeathon happened in Israel in partnership with the Ruderman Family Foundation. I spoke to some of the participants to get a better idea of how these whirlwind solution-creating fests work from an insider perspective.

If three days seem far too little time to come up with a working prototype of nearly anything, it’s because there are actually a few months of preparation involved before any makeathon. This period is called the preTOM. “I first met all the members of the group,” says Vital Zinger, a professional wheelchair dancer (she currently holds the second place in the European championship), a lawyer and long-time collaborator with TOM. “We started as 6 or 7 [people], in the end we were 12. This was during the preTOM. We tried to use Whatsapp to talk with one another. As a need-knower I gave my input on each solution and what would work and not, and what would be convenient for me to use daily.”

Zinger was part of the Winter Challenge team. “Winter is not very accessible for wheelchair users,” she says. The main challenge for which she served as a need-knower was solving the problem of tracking dirt into the house after you’ve been outside. This “interrupts me every winter, every day,” Zinger says. “If you step on something with your shoe, you wipe it off, but with your wheel it’s next to your hand all the time and cleaning it with toothpicks is not good. It’s 2017 and we need to find a solution for that.” It is a bit mind-boggling that there hasn’t been a commercially available solution to this problem that millions of manual wheelchair users face. Zinger explains that she has a row of towels in her home and she has to move back and forth until her wheels are dry. It’s not efficient and still leaves a mess in parts of the house. So what’s the solution the makeathon team came up with? 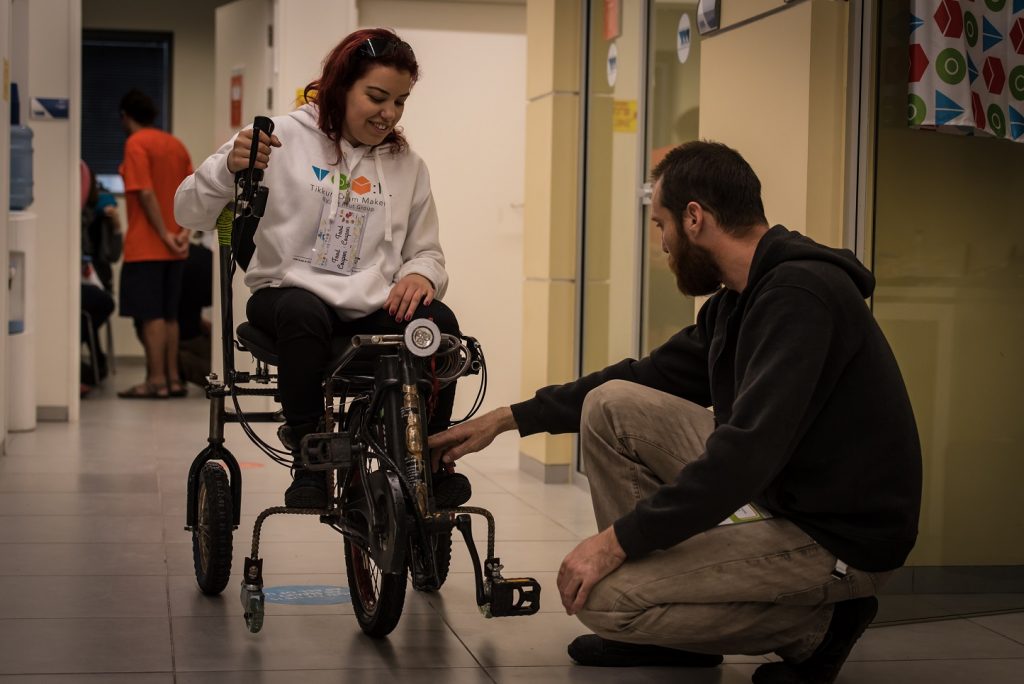 “We invented a brush that will clean the wheel,” says Zinger. But the brush had to be able motorized to clean the grooves inside the tires because wheelchair tires are not smooth. “The next step was connecting a blower to that brush [so that] at the same time it would brush and dry the wheels.” And so that the mud wouldn’t just splatter all around, the brush also had to have a compartment to store the dirt and water so that it could be easily disposed of at a more convenient time. This solution may sound incredibly obvious and simple, but one crucial aspect of the process was that it had to be tailored to Zinger’s needs. “Not everything that looks gorgeous is convenient,” she says.

“From a maker’s perspective it’s all about asking and a kind of empathetic design,” says Drew McPherson. He is finishing his mechanical engineering undergraduate degree at UC Berkeley and about to begin a masters degree there as well. “You need to be working with the need knower to find out what specifically the challenge is.” In the case of the wheel-cleaning brush it had to be portable so that people could use it at their friends’ houses, but it couldn’t be too heavy or clunky so that it didn’t add undue weight to the wheelchair. These are all parameters that need clear and constant input from the end-user perspective.

Although McPherson joined as a maker, a need-knower on his team couldn’t make it to the event, and because McPherson is a wheelchair user as well, he ended up also serving as a need-knower on multiple challenges. This kind of wearing of multiple hats is not at all unusual in a makeathon. Zinger captures the scene well: “No one left the work to eat. It was something we did together. Everyone volunteered. It’s even more intense when you’re not the only group who does it. There were almost 200 people there. And you have another 15 or 17 groups that are working on their challenges, and I jumped around to 3 to 4 challenges other than my own to give input as a need-knower and to advise them on what to upgrade and keep in mind. It was not only teamwork in our group, but between groups.” 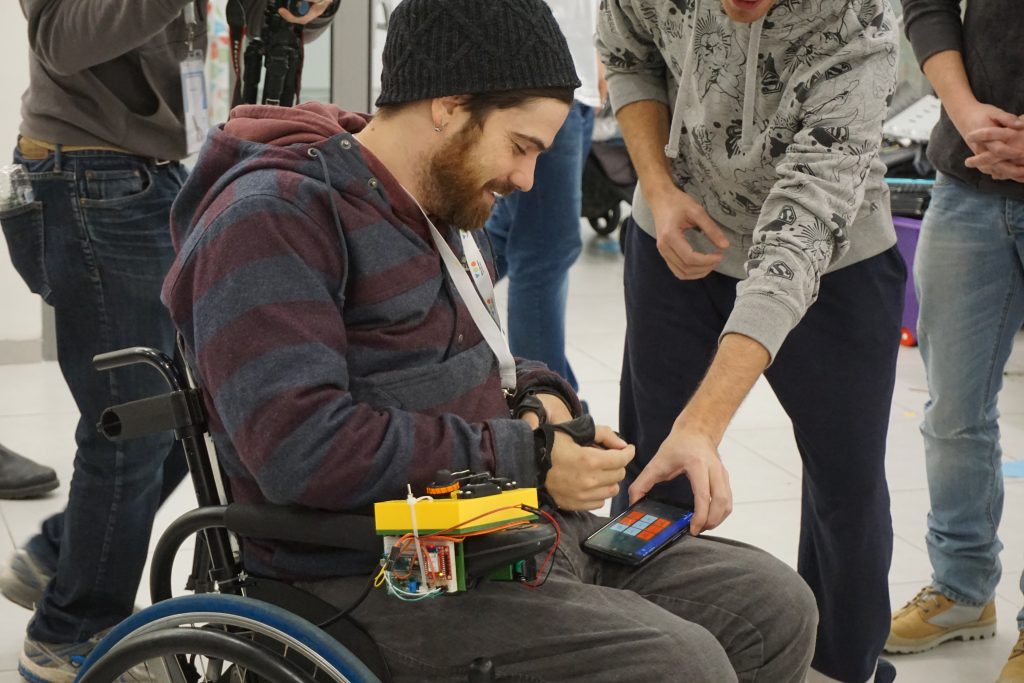 Drew McPherson offers his expertise in one of several challenges he participated in (photo credit: TOM)

So the burning question is, was all this intense time with dozens of engineers, occupational therapists, designers and need-knowers a success? “TOM is proof of concept and I think we did do that well,” says McPherson. “We won the prize for most scalability for most people” with the brush design. “But it would need to have quite a bit of development to have something that is really functioning and be able to be used on regular basis. But the first step was ‘hey this works, this is a feasible way of approaching it’ and we need more design time and machinery time to finish.” And to take this proof of concept all the way, there is the TOM developer groups, designed for projects that take several months to perfect.

However, even though the makeathons don’t necessarily finish with products that can be immediately used after three days, the notable point is that all their designs are open source. “We had an article about TOM in Haifa and the second it was up, I got a gazillion telephone calls,” says Zinger. “We’re already sending out documentation to everyone who is requesting it.” And free sharing is the crucial part of TOM. Anyone world wide can request clear documentation on how every product was manufactured and can replicate it in their own community. That is their enduring vision for making the world better.

But perhaps an even more important aspect of TOM is captured by McPherson when I asked him if he had anything else to say: “TOM is really addressing something that hasn’t been addressed. … Being at the makeathon it kind of flipped the story a bit. You had a certain number of need-knowers and instead of a day to day situation where the world is not created for you and for your participation … being at the makeaton that got changed around. You and what you need are very much center of attention.”