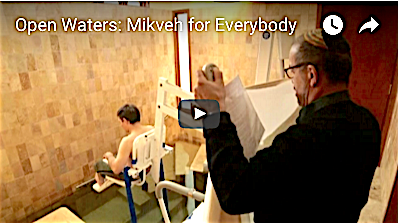 Mayyim Hayyim is a fully accessible Jewish ritual bath in Newton, Massachusetts. Mayyim Hayyim has become a destination for Jews across the spectrum of observance and affiliation to study, celebrate, immerse, and to be inspired about what is possible in the Jewish future. At the start of Jewish Disability Awareness and Inclusion Month (JDAIM), we spoke with Carrie Bornstein, Mayyim Hayyim’s Executive Director.

The idea for Mayyim Hayyim was to take this ancient ritual that for many people was unknown and foreign, and assumed to be only for a certain type of person – to open that up and to de-mystify it, to bring it to communities that had not traditionally made it their own. If you’re going to do that with a ritual that’s very foreign to probably 90 percent of the American Jewish community – if you want them to not only know about it but to really care about it and want to integrate it into their world – then you have to teach about it.

We’re here to say “yes” as much as we possibly can, to welcome in the whole diversity of the Jewish community. That means anticipating people’s needs, anticipating all of the reasons why they might think that this is ‘not for them’, or weird, or scary – all the different sensitivities that people understandably have around mikveh – how can we just throw those out the window? How can we get around them, and change things so it doesn’t have to be like that.

Some things are very similar. We are a kosher mikveh that was built under rabbinic supervision, is maintained under rabbinic supervision. The way water is collected, and the pipes and materials and all of that, is just like any other mikveh. It’s what we’re here for and what we’re explicitly open in welcoming in that can look very different. Not from every place, but from many mikvaot out there, this is something different.

Our goal here is to say yes and to be as open and as welcoming as possible, and that means giving as much of the ownership and the decision-making rights to the person who is coming in the door, who is immersing; they get to call the shots, not me, because it’s not my immersion.

RFF: Are there other mikvaot that are accessible to people with disabilities?

CB: There are a good handful of accessible mikvaot in the United States, and they vary. It’s certainly not commonplace. In many cases, if you have a physical disability, you may not be able to go, because you might not be able to get into the building, or get into the water without some real Olympian efforts, if at all. It’s not so common, but there are some out there.

We’ve been contacted by other mikvaot around the country who have said specifically: ‘We’re building a new mikveh, we want it to be accessible, what do we have to do?’ – which is wonderful to see. It’s incredible. People from the beginning are saying, ‘We want to do this right, what do we need to know?’

RFF: How much time do you spend on education and outreach outside the Boston area?

CB: We have a blog that’s both local and national, other work in national sphere includes consulting to other communities via phone, site visits, and speaking engagements. We share curricula that can be used elsewhere (some with no mikveh needed) and have run international conferences. We probably spend 80 percent of our time within the Boston community, and 20 percent serving as a resource to other communities.

As our introductory film highlights, we don’t not only have to pay attention to wheelchair accessibility, but also to people with other disabilities like blindness or Down syndrome. How do you welcome them in to what you’re doing, so that it works for them – whether you’re in a mikveh or anywhere else.

In the next couple of weeks, we’re launching a companion discussion guide to go along with that six-minute film. It’s written mostly with kids in mind, but it could also be adapted for use with adults. It could be used in schools, camps, or for a Board. After watching the film, groups can have a guided conversation about the different barriers that existed for three people coming to use the mikveh, how Mayyim Hayyim got around those barriers to make it a welcoming experience, and then discuss the barriers that we have in our community – how do we get around those.

We’re also creating a new picture-guide version of our Seven Kavanot for mikveh preparation, which is a whole set of steps that a person goes through to get ready for the mikveh. In many mikvaot, there’s a photocopied checklist on the wall that says, “Take a shower, brush your teeth,” etc. Ours has that, but it’s also a spiritual kind of preparation, that helps you think about what you’re doing and why you’re doing it.

It’s beautifully written and gets you mentally prepared for the transition you’re about to mark. That also exists now in many mikvaot – they’ve brought that into what they do. It’s lovely if you have a sense for the written word; it’s really not lovely if you don’t speak English or if you have a cognitivie disability. We’re creating a picture guide for people to follow, so even if they don’t relate well to the written word, they can still follow the steps and get what they’re supposed to be doing. We’ll be making this available in the coming months, and other mikvaot can also use it for their visitors.

RFF: Did you have to develop any new kinds of technology, or were all the components for accessibility already available?

CB: We had bought an old Victorian home, and then renovated the existing first floor and bedrooms into our education center and office space, and the mikveh itself was all new construction. So from the beginning, this was part of the design element that was non-negotiable.

We were creating this new space, and the vision was to be accessible and to be open for all different kinds of people, which meant it had to be physically accessible. The walkway coming into the building is all to regulation – there are no stairs to climb. The spaces on the floor where people would need to go for the education center or the mikveh are all wheelchair-accessible.

We bought an aquatic lift that’s used to help lower someone into the water who can’t walk; that was an early purchase. There was someone who was converting to Judaism, who waited for Mayyim Hayyim to open in order to convert. He couldn’t walk, and used a wheelchair. He helped us figure it out, including what kind of equipment we’d need to purchase and how to protect someone’s privacy. Partnering with him was really important in figuring out how to do this in a way that preserves and maintains one’s dignity through this process, this celebration.

We have the lift, which remains in a closet when it’s not in use, and it’s here for anyone who needs it. One of our preparation rooms is fully accessible to somebody in a wheelchair – there’s no rug when you enter the room so it’s easy to wheel right in; there’s a shower that a wheelchair can roll right into, with a handheld nozzle. Everything has been thought through from that perspective, it’s explicitly and intentionally built that way from the beginning.

RFF: How significant was the additional expense to make the mikveh accessible?

CB: There are different kinds of expenses. There’s the lift, which was an additional expense of several thousand dollars. On the one hand, that’s real money, and at the same time it seems so obvious to find that money so you can have it.

Everything else, where you’re building from scratch, I don’t know that it added expense. That’s probably the easiest time to do it, but it’s not necessarily impossible to install afterward.

RFF: Since Mayyim Hayyim first opened in 2004, have you noticed a general shift in mikveh culture?

CB: Last year, we had 1500 immersions at Mayyim Hayyim. How many of those people would have gone to a mikveh if we didn’t exist? The vast majority of our population comes to us because we’re here; these are not people who would be going to mikveh in other places. We definitely have some who, if they’re not coming here – if they’re traveling – they might go elsewhere. But mostly these are people who get introduced to the concept of mikveh because of Mayyim Hayyim.

This is new for them, and we’re able to create this atmosphere for them, that this isn’t something you have to do before you can go home and really celebrate, as with a conversion. You can celebrate here, and this can be an important way to mark different transitions in your life, whether it’s for healing or celebration, or before holidays. It’s definitely had an impact.

As for the tenor online and the national conversation, people are talking about mikveh in a totally different way than they did a few years ago. When I started working here in 2008, if you knew nothing about it and just Googled “mikveh”, what you found would not make you feel good or positive at all. Now, there are all these incredible stories, and people sharing their experiences. They’re talking about the topic in general, their challenges and experiences, how it’s meaningful. It’s a totally different landscape nationally than it used to be.

There are communities now that have started something completely from scratch, based on this model. Today, if you can’t make it to Boston and Mayyim Hayyim, I can refer you to Raleigh, or Manhattan, where they’re helping people get into mikvaot. Atlanta is fully accessible. So there is some traction nationally.

Nationally, accessibility is still in process. In Raleigh and Atlanta, the mikvaot have been built to be accessible. Our work is definitely bringing more attention, including our film. People are more aware, and they think about making any new mikveh accessible. I don’t think many existing mikvaot have become more accessible, but the first thing you have to do is get people to realize that it’s an issue, and I think that is happening. 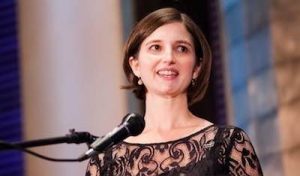 Carrie Bornstein is Executive Director of Mayyim Hayyim, and in 2013 Combined Jewish Philanthropies named her one of Boston’s 18 most influential young adults. She has degrees from Skidmore College and Boston University, and lives in Sharon, MA, with her husband and three children. Twitter: @carolinering