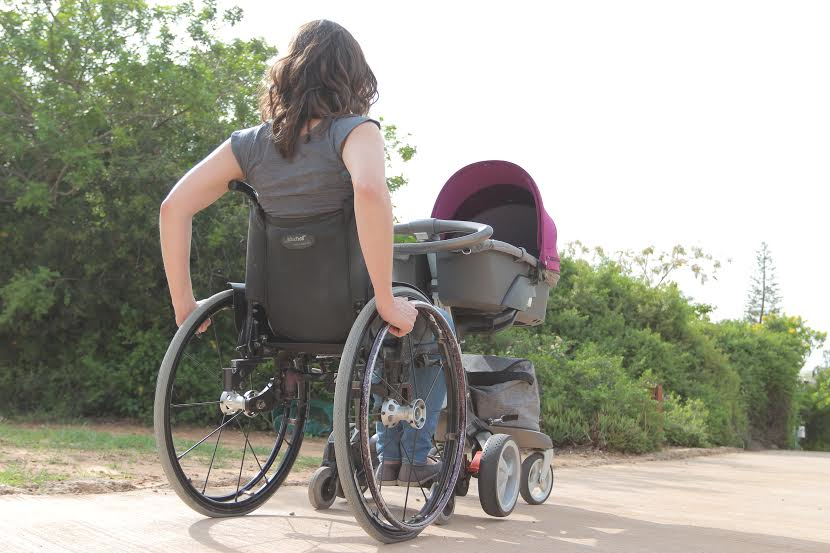 EasyStroll is an easy and fast connector that enables a wheelchair user to move freely and independently with a baby stroller attache. Estimated to cost $400 when commercially available, it’s the first in a series of independence-promoting products being planned.

The Ruderman Family Foundation spoke with Dana Yichye Shwachman, an industrial designer with Jonathan Bar-Or Industrial Design (JBDesign), where she leads the EasyStroll project and was an entrepreneur in the 2015 cohort of the A3i Accelerator. The accelerator was an initiative of the Foundation, in partnership with PresenTense, Beit Issie Shapiro, and The Jewish Federation of Greater Los Angeles.

RFF: How did EasyStroll get started?

Dana Yichye Shwachman: My father is a paraplegic – he was in an accident when he was 17. I grew up with a very independent father, who was physically challenged repeatedly; often, he was unable to do things because of his surroundings. That’s the reason I decided to be an industrial designer, hoping to make change through smart and good design that enables and doesn’t disable.

During all the years, Jonathan Bar-Or was really supportive of me. I’ve also volunteered in non-profit organizations related to disabilities, and I gave many lectures. Through one of my lectures, “Design Meets Disability,” I met Amira, three years ago. She was eight months pregnant. She said: ‘I understand you have a skilled team in the studio – can you help me? I’m a single mother, and in one month I’m going to have a baby, and I don’t have a solution how to push my baby carriage.’ That’s how the EasyStroll started.

We took Amira as a case study. We said, we’ll develop this for you as our first study case. After two months, she had a connector. We gave her the ability and the independence to be like every other mom. After a year, one of her good friends asked if we could make one for her, too, and so we took the same connector and adapted it to her wheelchair. Because this was a small project for us, we didn’t do much with it.

After a couple of years, we realized that 8,000 people had watched the YouTube video – without any marketing by us. We began receiving emails from around the world asking where to purchase the connector. We realized that we had something bigger than one custom-made project. 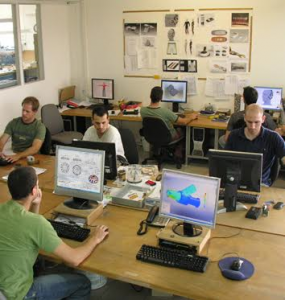 Jonathan and I decided that we wanted to make this our first project in the disability field, because there’s a real need here and a market. I suggested we apply to the A3i program, learn how to be entrepreneurs, and take it forward. I was in the program for a half-year, learning and preparing to be an entrepreneur in this field.

RFF: What were your biggest challenges in developing the connector?

DYS: Safety and convenience were our main goals. The parent has to feel safe using the connector, if the baby is connected to the wheelchair. It uses two small handles to connect, and it opens just by pulling up. That was very important, that it be fast and easy to connect and disconnect – to be able to reach the baby quickly.

It’s also for the families of people with wheelchairs. Grandparents can also use it for their grandchildren. My parents are really waiting for a universal connector. I have a 2-1/2-year-old son, and my mother can’t take him with my father outside – she can’t push a stroller and a wheelchair at the same time. That’s another kind of user we’re targeting.

The target demographic is bigger than the 5-1/2 million wheelchair users – that’s the total just in Europe and the United States.

At the A3i launch, people were very impressed with our product. One mother who is paraplegic was able to try it out at the event, and was blown away. 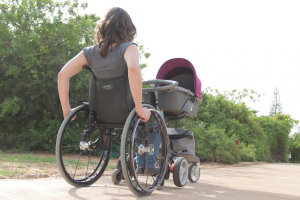 DYS: I originally went to work in the medical field, because it’s the closest I could get to design for disabilities.

First of all, the field for disability products is not developed. No one has thought about how a parent in a wheelchair takes care of her child. At the annual REHACARE conference in Germany, which showcases assistive technology, there isn’t even one product addressing the needs of a parent in a wheelchair. There’s just a big gap.

As a mom, it’s unacceptable to me that there are mothers who cannot go out with their children. There are parents who go outside with their kids for the first time when they’re a year old and can sit on their laps.

We’re just enabling every mom to be equal to every other mom.

RFF: Are there other products you’ll want to develop in this direction?

DYS: First of all, we have a vision that, when we finish the connector for the stroller, the wheelchair will become a base for independent living. A truly universal connector can attach to a shopping cart, and many other applications in daily life. Even young children will be able to carry books with them to school. Families want to go on picnics. So, we envision developing other attachments to the connector.

We also want to develop another line of products for independent parenting. From our research with parents, we saw there are many levels of independence and of products we can develop to help them be independent throughout their children’s development – not just when they’re babies, but when they sit on their laps, when they begin to wander off and not listen to the parent. For safety reasons, many parents in wheelchairs just don’t go out with their kids. My father never took me anywhere, because he couldn’t.

We can develop simple, smart products that help them be just like any parent. Just because parents are in a wheelchair, that’s no reason they can’t take care of their children – it’s not fair, the way I see it.

We also want to be a studio that’s a research base for study cases, so people can come to us with a problem, and we develop a solution. We can learn through them if it’s a wider problem.

Here’s another custom-designed project we did last year in the studio. An army veteran who suffered chemical exposure had a very specific problem. For six or seven years, he wore one pant leg shorter because of over-stimulation on his skin. A few months before his wedding, he asked us to help him so he could get married in long pants. Our specialty is designing devices that are wearable, so we developed a kind of brace that kept the fabric off his skin. Now he uses that every day.

We want to take the case studies and develop them.

Jonathan Bar-Or and I have this vision to develop the world of designing for disabilities. Through smart design, we can enable independence for people. I don’t think people with disabilities are unable or disabled, we are un-abling them by not designing with them in mind.

I know, if we design smartly and simply, and look at people’s abilities – not their disability – we’ll be able to help and change their lives. 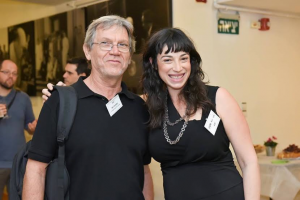 Dana Yichye Shwachman is an industrial designer at Jonathan Bar-Or Industrial Design Studio (JBDesign), one of Israel’s leading studios specializing in the medical field, where she is leading the EasyStroll project. A graduate of the Holon Institute of Technology (HIT), where she currently teaches Social and Inclusive Design, she volunteers with MILBAT, a non-profit supporting people with special needs, and with Tikun Olam Make-a-thon (TOM).