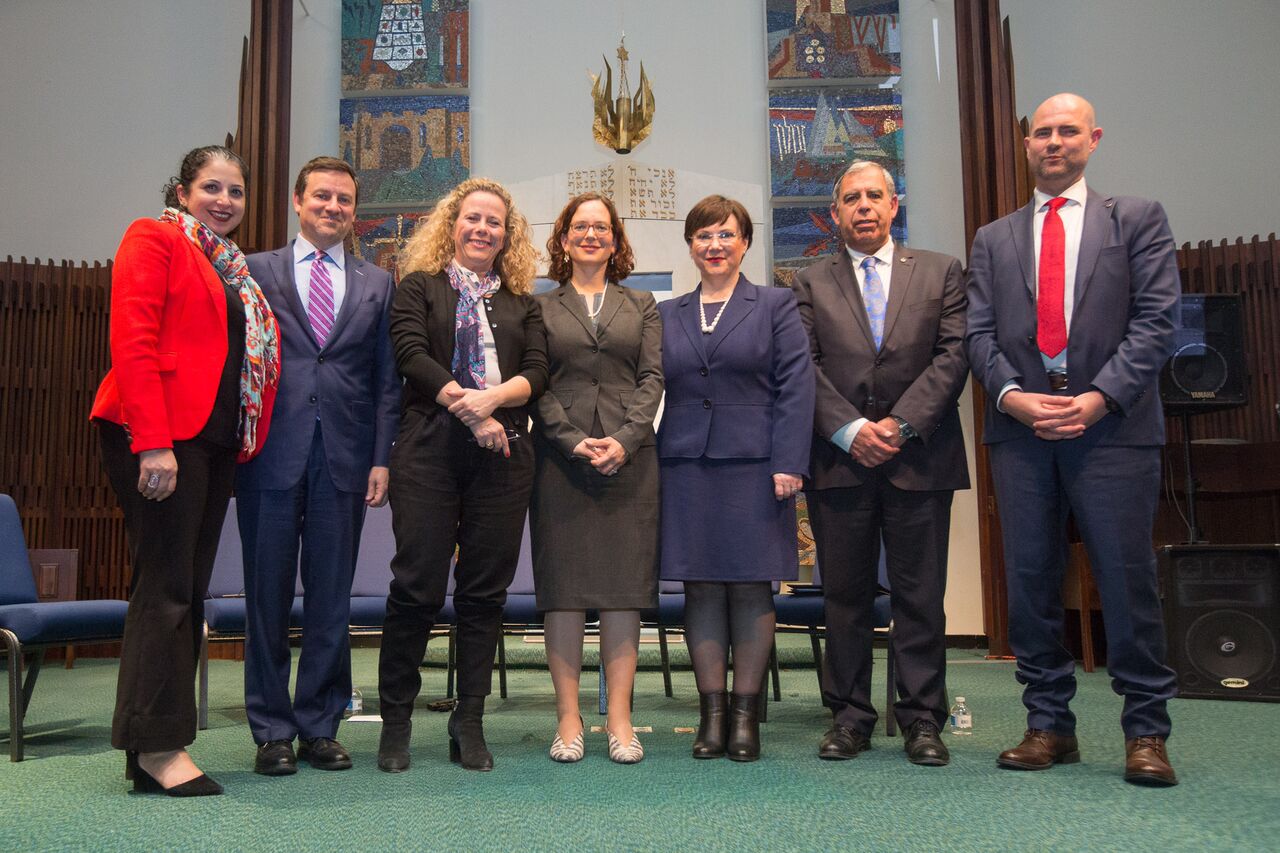 BROOKLINE — Five members of the Israeli parliament held a town hall-style discussion Wednesday night with Jews from Greater Boston to address growing anti-Semitism and strengthen the future of the American-Israeli partnership.

“When there are anti-Semite incidents in America, we feel responsible,” Rachel Azaria, a member of the Kulanu party of the Israeli parliament, formally known as the Knesset, said in an interview.

Azaria was joined by four other MKs, or members of the Knesset, who attended the town hall sponsored by the Ruderman Family Foundation. The other MKs who took part were Kulanu MK Tali Poskov, Yesh Atid MK Mickey Levy, Likud MK Amir Ohana, and Zionist Camp MK Ayelet Nahmias Verbin.

The delegation visited the United States for one week at the invitation of the Ruderman foundation, which brings Israeli politicians to the United States to learn about the American Jewish community. The group also met with Jewish leaders and policy makers in New York and Washington.

“This will start to plant the seeds” of dialogue, said Jay Ruderman, president of the nonprofit organization. “Israel can’t afford to ignore the American Jewish community.”

At times, the discussion was emotionally charged and even heated. One resident also took the opportunity to question the MKs about Israel’s response to terrorism.

Shifra Freeman, a 55-year-old artist from Brookline, told the MKs that they were “losing” her as an American supporter of Israel. She questioned their choice to kill Palestinians in response to terrorism and asked what they were doing to “make peace with the Palestinians.”

“It wasn’t easy,” Azaria said in response, asking Freeman to trust that the Israelis are making difficult, but necessary, choices.

“To think that we enjoy living in terror and living with our rifles, we hate it. We all hate it. But we can’t seem to find a solution that will keep us strong and sheltered,” she said.

Rabbi Bill Hamilton, of Congregation Kehillath Israel, said the impassioned question created a forum for the members of Knesset to give thoughtful and heartfelt answers.

“That’s the energy source,” Hamilton said after the program. “It gets heated because people care.”

A college student asked what can be done on campuses in the face of anti-Semitism to support Israel and Jewish people around the world.

“We need you guys to pressure the American president to help us and support us,” he said.

Ruderman said he hoped members of the Knesset would listen closely to the opinions of college students. It’s important for Israeli lawmakers to understand how young Americans feel about the country, he said.

But it’s a change that some Israelis are noticing, too, MK Ohana said in an interview before the program.

Younger generations of American Jews are quieter about their support for Israel, and as a result, they are taking their roots for granted, he said.

Programs like the one held Wednesday night are intended to help young Americans, both Jewish and non-Jewish, “get to know Israel.”

“We all share the same roots. We all come from the same land,” Ohana said. “How long can we survive as a Jewish people without our roots?”