Game, Set, Match: Inclusion On and Off the Court 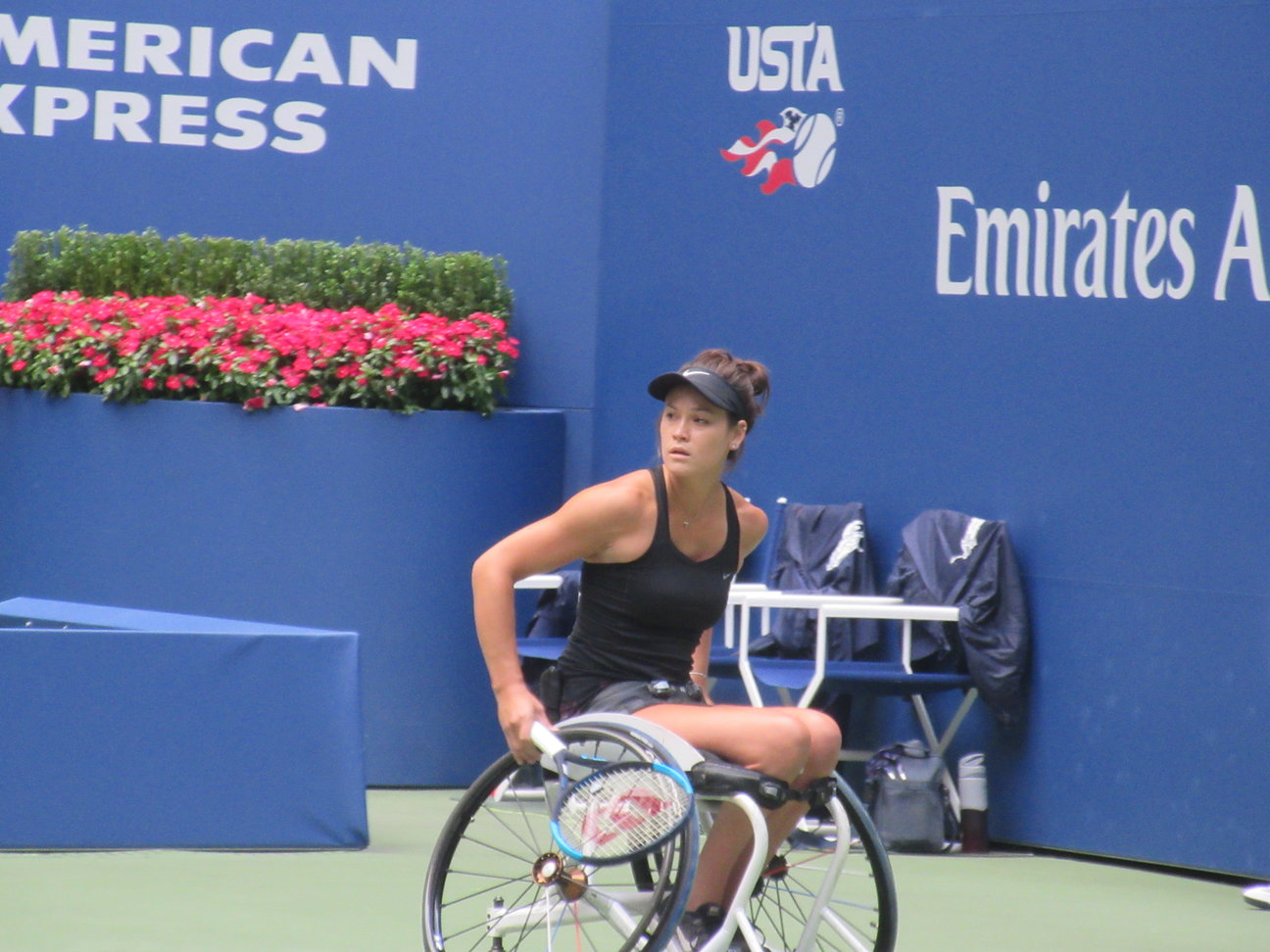 Game, Set, Match: Inclusion On and Off the Court

This blog was contributed by Howard Blas, Director of National Ramah Tikvah Network.

Dana Mathewson hits lightning serves and ground strokes and races to return seemingly out of reach tennis balls on Arthur Ashe Stadium at the prestigious U.S. Open tennis tournament.  Yet, her name is not nearly as well known in the tennis world as Roger Federer, Rafael Nadal and Serena Williams.  Every time this 26 year old number #1 ranked player from San Diego takes court for singles or double matches, people notice more than her amazing strokes.   Dana and her opponents play world class tennis while sitting in specially designed, light weight wheelchairs.  Her journey to Arthur Ashe stadium is a result of her great determination and talent.  It was also made possible by extraordinarily innovative and inclusive programming, both at the U.S. Open and at the University of Arizona where Dana was introduced to wheelchair tennis.

At the US Open, wheelchair athletes receive the same treatment and respect as all other participants—chair umpires, ball persons, digital scoreboards, press conferences, and even the chance to play in the famed Arthur Ashe Stadium.  Following Mathewson’s first round doubles victory with partner, Aniek Van Koot of the Netherlands, they were interviewed post-match by the on court emcee and signed autographed balls which were hit in to the stands for lucky fans to catch.

Mathewson’s journey to the U.S. Open began when she contracted a rare neurological disease known as Transverse Myelitis at age 10.  The disease causes the immune system to attack the spinal cord and she went from running sprints on the soccer field to being paralyzed in a matter of minutes.  Mathewson’s mother recognized the importance of sports and recreation for physical and mental health and encouraged Dana to play adaptive sports. 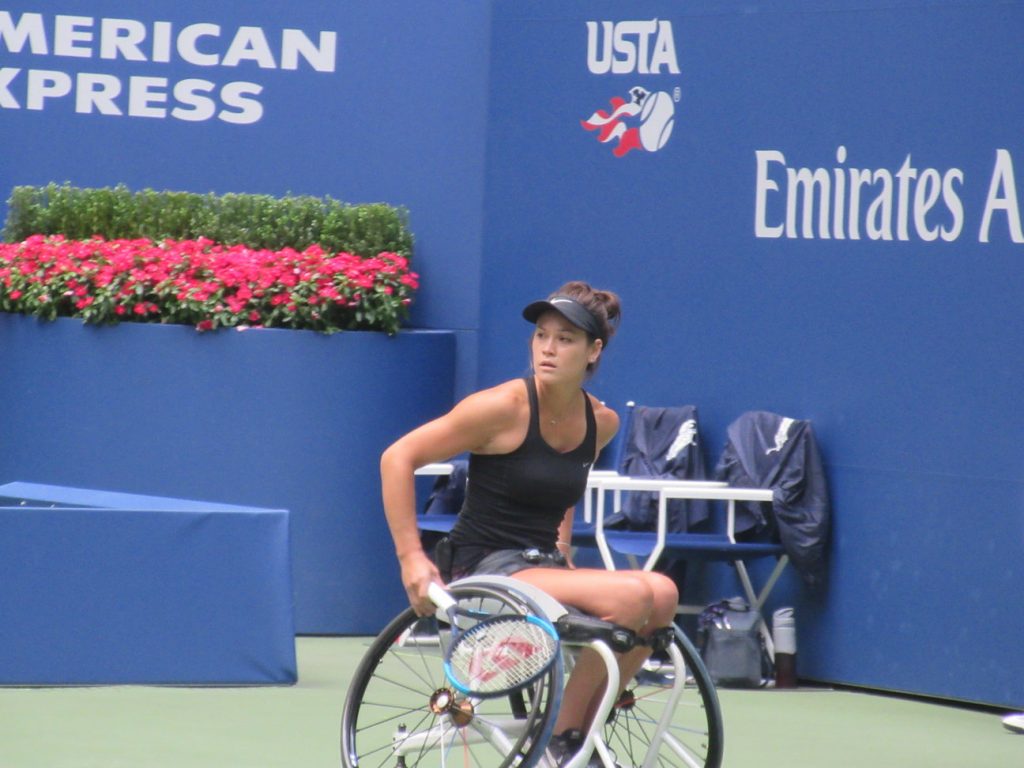 Dana Mathewson and doubles partner,   Aniek Van Koot of the Netherlands, communicating between points on court at Arthur Ashe Stadium during first round/semi finals 2017 US Open doubles match.  The two won the match and lost in the finals 6-4, 6-3 to Buis and de Groot.

When it was time to explore colleges, Mathewson wanted to find a place where she could continue her athletic career.  Unfortunately, most universities fail to go beyond minimal compliance with the ADA (the Americans with Disabilities Act).  Campuses provide services to help students with academics, such as extended time on tests and note-takers in class.  However, the University of Arizona takes a more holistic approach to inclusion for students with disabilities.   The institution acknowledges the importance of sports, recreation and healthy living for students with disabilities.  The University of Arizona’s adaptive athletics program is open to students and community members and currently includes five competitive sports: basketball, rugby, track, road racing, and tennis.  The athletic department is housed within the disability resource center.

“When I heard Arizona had a program, I said I was definitely going there, and they offered me a scholarship. It is not an NCAA sport as of yet, it is a club sport, but we compete against other schools. They have collegiate nationals and they help with tournament assistance like coaching,” says Mathewson.

The adaptive athletics program at the University of Arizona does not play “watered down” versions of sports, nor does it demand any less commitment from its athletes than do other athletic programs on campus.  Dana attributes her success to this rigor.  She explains, “We practiced daily like all D1 (division 1) athletes. This was a big stepping stone to me becoming a pro player and getting to tour and getting to play on Ashe.”  At Arizona, Mathewson competed with athletes from such schools as Alabama, Whitewater, Texas Arlington, and Grand Rapids.

Dr. Amanda Kraus, the Director of Disability Resources at the University of Arizona, herself a wheelchair tennis player, says, “The University of Arizona (UA) has a long history of disability resources on campus.  We work to cultivate an inclusive and welcoming experience that goes beyond minimal compliance obligations with a proactive and progressive approach to campus access.  We support all aspects of the disability community and are particularly proud of our Adaptive Athletics program.  The largest in the nation, we host six competitive teams and have seen over 30 athletes compete in the Paralympic Games.”

The program and the accomplishments of its athletes are indeed impressive – sending 30 competitors in the Paralympic games speaks volumes about the preparation that the school provides for its athletes.  But perhaps the most remarkable element of the adaptive athletics program and its leadership is its holistic view of inclusion.  Kraus says, “We appreciate the power of sport to provide opportunities for personal development, health, competition and inroads to higher education.”  For a college campus to “succeed” at inclusion, it needs to provide more than note-takers.  It needs to foster an atmosphere that makes all students feel welcome in classrooms, cafeterias, sport facilities, dorms, and more.

Dana’s experience at the University of Arizona has been tremendously beneficial.  The hours of practicing and competing paid off:  Mathewson has also played tennis at Wimbledon, and when she  heard that the U.S. Open would be at Arthur Ashe stadium, she said it was “a pinch me kind of moment”.

One of the most compelling aspects of inclusive programming is that it pays off long-term. Bryan Barten, a current US Open quad division participant who coached Mathewson at the University of Arizona from 2009-2013,is proud of her accomplishments and those of other wheelchair athletes—on and off the court.  He explains, “I have engineers, attorneys, people in education, scientists.  So many different players who played for me are doing great things outside of sports. That’s what makes me proud.”  Indeed, when student athletes are meaningfully included in sports, this demonstrates that they should accept nothing less from the other places they spend their time.

Mathewson is well on her way to making an impact outside of the sports arena. The day the US Open ended, she was off to England to start a master’s degree program in audiology with the hopes of becoming a pediatric audiologist. 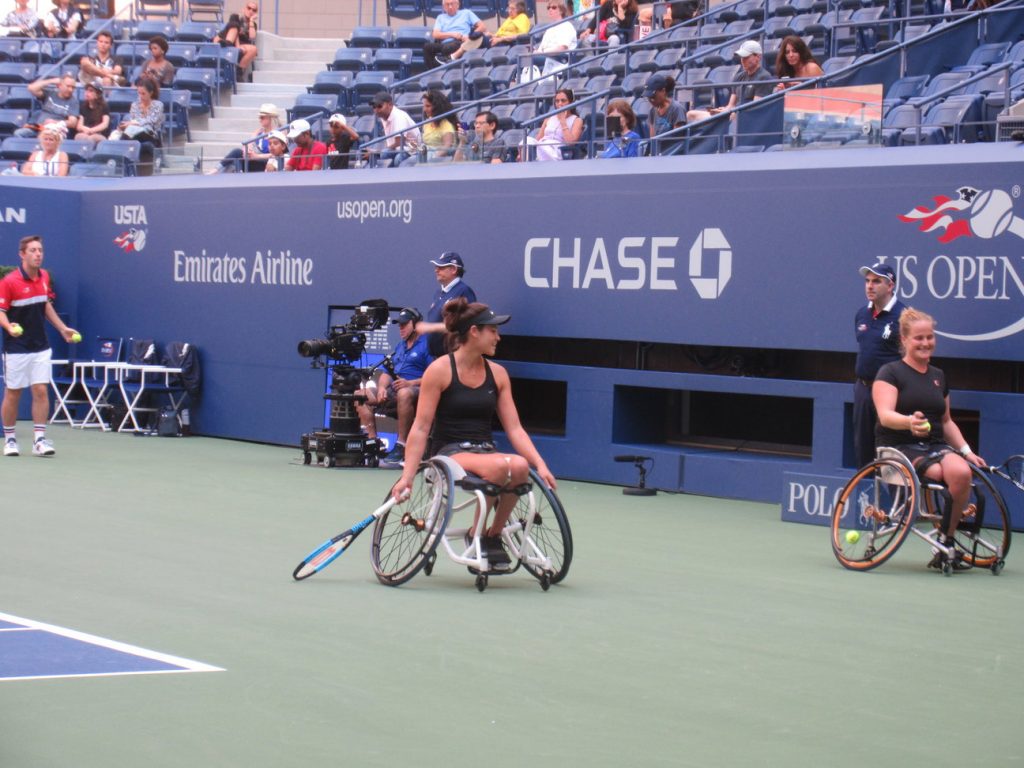 Dana Mathewson and doubles partner,   Aniek Van Koot of the Netherlands, communicating between points on court at Arthur Ashe Stadium during first round/semi finals 2017 US Open doubles match.  The two won the match and lost in the finals 6-4, 6-3 to Buis and de Groot.