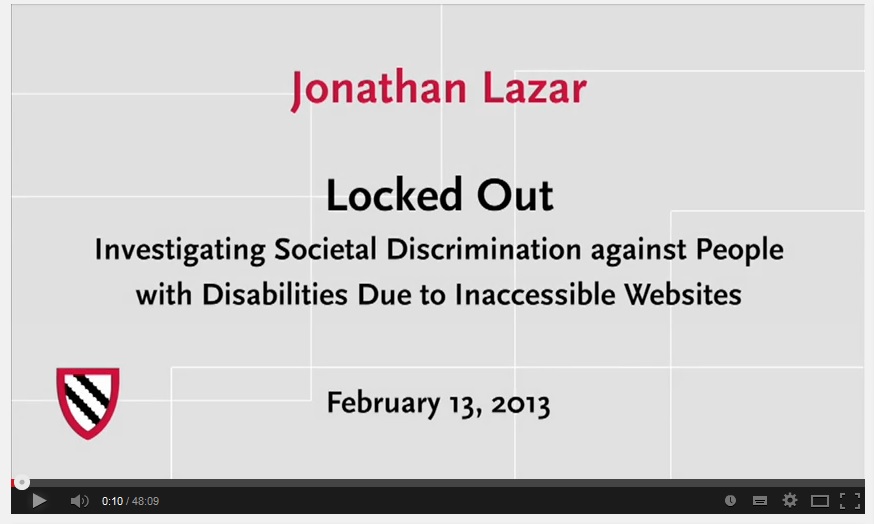 People with disabilities need to have equal access to web-based content and the resulting opportunities in education, socializing, employment, and commerce. If you are using an alternative form of input or output, such as a screen reader, alternative keyboard, alternative pointing device, or captioning, you need to have equal access. It’s a fundamental civil right and a human right. That last line often makes people pause, especially people who work strictly in technical fields. A civil right? A human right?

Well, think about this. You are Deaf, and there was a radio show in DC, on the topic of accessible technology, streamed online, but the show was not live captioned for the Deaf and Hard of Hearing. So, you were cut out of participating in the show, or e-mailing into the panelists with questions. You were excluded from the conversation. You did not have equal access.

You are blind and utilize a screen reader, but the web sites of some major airlines are inaccessible. So, since the web site won’t work for you, you call the airline and ask for flight information, and when you are put on hold, the airline recorded message says, “lower fares available on our web site.” As it turns out, the airline does quote a higher fare on the phone than the price quoted online, and the airline also may charge you a “call center fee.” You have just paid a higher fare because you are blind, compared to people who can see, for the exact same airline ticket. You have just experienced pricing discrimination.

If you want to apply for a job, nearly all companies require that you apply for that job online. So you go to apply online, but the web site won’t work for you, either because you are blind and utilize a screen reader, or you have limited use of hands (due to a motor impairment such as repetitive strain injury), and can’t utilize a pointing device such as a mouse. You can’t apply for the job online. You call the employer to ask if you can apply on paper, or apply over the phone, and they demand to know why. Do you identify that you have a disability before even applying for the job? Or do you act sheepish and say, “it’s just hard to use” and then, it is likely that the employer will write you off as unqualified? You have just experienced employment discrimination.

These are three examples of discrimination, which have previously been well-documented. International technical standards to make web sites accessible have been in existence since 1999. There is a large body of statutory law, regulations, case law, and best practices, for making web sites accessible for people with disabilities. Inaccessible web sites exclude people with disabilities from education, commerce, employment, and other opportunities to participate equally in society.

Yes, web accessibility is a civil right. In fact, inaccessible web sites that violate the Americans with Disabilities Act or the Rehabilitation Act of 1973, are investigated by the Civil Rights Division of the U.S. Department of Justice. Related to human rights law, the UN Convention on the Rights of Persons with Disabilities (CRPD) specifically mentions access to information technology and the Internet, in Articles 9 and 21. It’s not just about technology. It’s a civil right and a human right.

Dr. Jonathan Lazar is a Professor in the Department of Computer and Information Sciences at Towson University. He is the director of the undergraduate program in Information Systems. And some of the work mentioned in the blog posting, is based on the year he spent as the Shutzer Fellow at the Radcliffe Institute for Advanced Study at Harvard University.

Dr. Jonathan Lazar is a Professor in the Department of Computer and Information Sciences at Towson University. He is the director of the undergraduate program in Information Systems.