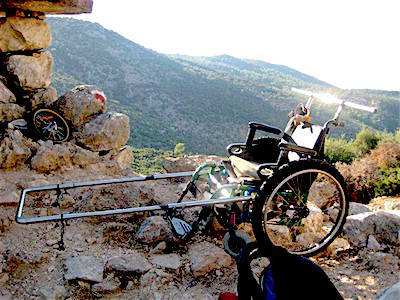 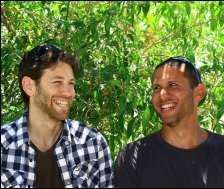 Paratrek is developing innovative programs and technology that enable people with and without physical disabilities to hike and trek together. Paratrek co-founders Ziv Demter and Omer Zur were among A3i’s 2015 cohort of entrepreneurs. They recently took time to discuss Paratrek and their vision for inclusive hiking.

RFF: How much is Paratrek a service, and how much is it a product?

Ziv Demter & Omer Zur: Our company provides a service for the physically impaired. We arrange treks and outdoor experiences for the physically impaired, from one-day treks to a whole month in Israel or around the world, for individuals and for groups. With every prospective client, we go over all their dreams, their disabilities, their needs, and then we know the right route for them – or what they need in order to accomplish each route. This is a tailor-made service. 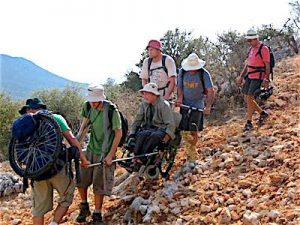 We have groups that come to us, whether it’s families or groups of friends, teams from the army where one of them is a disabled veteran – all different kinds of groups. They’ll tell us they want to use a particular trail, and one of their members has special needs, and they want to know how we can help them.

We’ve also developed a special wheelchair that can go on almost every terrain, the Paratrekker; we are currently developing a second version, so we can use it and later sell or rent it out.

RFF: Are you already using the Paratrekker on treks?

Ziv: Yes, we use it on treks in Israel. We take mixed groups – people with and without disabilities. It’s also a part of our ideology: A group is a group, just that one of them sometimes can’t walk or has difficulties. We provide them the service so they can go out to travel and to hike.

Omer: We’re also in the process of building groups with people of mixed abilities that will hike on a regular basis. The idea is to hike together once a month in Israel, and then once a year go on an expedition in some exotic place around the world.

Ziv: One of the things that distinguishes us from other tour operators is that we know our routes and our treks in Israel very deeply. We know exactly where we can go with the Paratrekker and where we can’t do it.

Omer: It is a technique you must learn and practice. Ziv and I know how to operate the Paratrekker, but more importantly, we know most of the routes in Israel in a deep way. We’ve walked Israel’s trails back and forth, east to west, north to south, all over the country, many, many times.

RFF: How did you develop this deep knowledge?

Ziv: Omer and I have been traveling and hiking since we were rather young. And over the years, we started working with people with disabilities. We both started several years ago, not together, but on parallel tracks. As soon as we connected our journeys, we already had Paratrek – we just hadn’t named it yet. 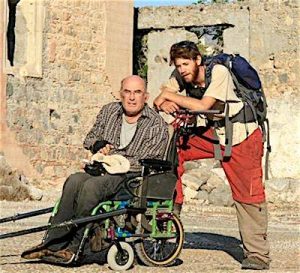 Omer: My story began 42 years ago in the Yom Kippur War. My father was a young officer in the Armored Corps. He was severely wounded – he broke his neck and was paralyzed from the chest down – and confined to a wheelchair. So I grew up in a house that, aside from the fact that he’s actually in a wheelchair, he has always done everything by himself and no one has ever thought of him as being in a wheelchair. And this is what he teaches: If you want to do something, then you go and do it.

Not only were we able to go trekking together, he made us hike and trek even more than an average family, all over the country. A few years ago, when I finished my military service and I took my post-army trip, it suddenly hit me that my father was injured at the age of 20, and he didn’t get to take the post-army trip as most young Israelis do. So I decided to take him on his trip.

We went for a whole month in the Taurus Mountains in Turkey, along with 35 people who came to help us. When I saw what this environment – the trekking, the outdoors, the tents, the cooking, nature – did to him, as well as to all those who came to help, I realized this is what I’m going to do in my life: To create these mixed groups, to take people with physical disabilities, and to experience nature in all its wonder.

Ziv: I worked almost five years for Etgarim [Hebrew: “Challenges”], a non-governmental organization (NGO), mainly with people with physical disabilities. One of my highlights from this period was helping to lead a team to Mt. Kilimanjaro. A documentary about this journey has just come out.

The two of us met almost 1½ years ago and started working together.

Omer: We both felt there is no address for people with physical disabilities who really want to go outdoors. They have this dream, this goal, and no one will give them the tools or the opportunity to do that. Even the organizations that already exist – and that do incredible work – are invested in their existing programs, and can’t be so flexible. We want to make these dreams come true.

RFF: How expensive is the Paratrekker?

Ziv: We want to make the Paratrekker affordable, but first, we want to make the trips affordable. Not everyone needs a Paratrekker. Some people just want to go on a hike once or twice a year. They can come to one of our groups, or they can connect with us and we’ll arrange everything they need and whatever they’d like. We want to make it affordable, with no need for expensive equipment. Our goal is to offer this at an affordable price, so more people can go out and enjoy the outdoors, which – according to our ideology – is a basic right that applies to everyone.

Omer: Any person today with special needs who even contemplates leaving the house faces high prices, whether it’s a hotel, sightseeing, etc.— it doesn’t matter where. They need a lot of equipment, and everything is very expensive. That’s the main idea behind it: We want to make sure that every person who wants to can go hiking — just like you, me, our families, can decide tomorrow morning to get into our car, just drive somewhere, stop the car and go hike — it’s that easy, that basic. We want to make sure it’s affordable for everyone who wants to do that.

RFF: How many groups have you taken using the Paratrekker prototype?

Omer: We have taken a number of groups using the Paratrekker prototype, and another group is due to go in a few weeks. We’re working on an expedition we hope will go out in August to Mont Blanc in France. And we hope to have many more.