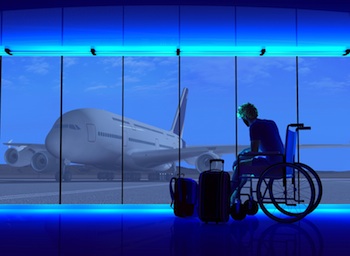 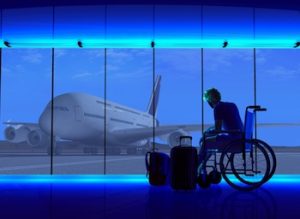 If airlines set an example by providing proper service to people with disabilities in view of hundreds of passengers, they will make a greater contribution

Just days after a widely publicized incident in which Swiss Airlines was highly insensitive to a person with disabilities, there’s news of another incident, involving a passenger with disabilities who literally crawled off a United Airlines flight as the cabin crew stood by watching. Unfortunately, these incidents come on the heels of many others. Is there any way out of this seemingly endless loop of horrific incidents and eventual apologies?

To be sure, there has been significant improvement among airlines and their crews in their attention to accessibility for people with disabilities. Still, there is obviously a long way to go, especially when dealing with children and adults with complex disabilities, including mental challenges and autism. Proper service for people with disabilities goes beyond giving priority to people in wheelchairs, it calls for a change in attitude on the part of airlines – system-wide implementation and training for employees in multiple job types, from the frontline people working in reservations and ticketing, to ground attendants and flight crew.

Truth be told, flying is rarely a pleasant experience, even for people without disabilities. We all know how difficult it is for us – and especially for children – to sit in the crowded seats on the plane, forced to stay put, wait for restrooms, and be careful not to bother the person in the next seat. And there are the delays, frightening turbulence, and more delays…

Members of the flight crews, for their part, mostly do their best to offer courteous service and to deal with passenger requests, and maintain a high level of service. Yet people with disabilities and their families often report that airlines are flat-footed in dealing with their special needs. Such incidents frequently result not from bad intentions, but from a lack of awareness, and absent the knowledge, tools and support necessary to contend with complex situations.

Imagine what might have happened, on the Swiss flight, had the flight attendants known how to deal with eight-year-old Yaheli’s crying fit. What wonderful service the flight attendants could have given Yaheli, his family and thousands of people on the autism spectrum, had they explained the situation and the reason for it to the passengers!

Hundreds of passengers could have experienced a teachable moment in understanding people with differences and their needs, learning how children on the spectrum react to change and unfamiliar situations. In addition, all of the passengers would have gained from the presence of a professional flight crew with a high level of awareness and the ability to provide professional service, with a broad, high-quality response to the varied needs of passengers. And those crew members would have undoubtedly felt a strong sense of professional pride and personal satisfaction.

We should remember that the airlines would benefit from this, as well. People with disabilities constitute a strategic market segment, accounting for 20 percent of the population. They have considerable purchasing power and require the services of airlines as much as anyone else. They travel to work, visit their families, meet friends, go on vacation, or undergo medical treatment. They deserve better service and the same dignity as any other passenger.

In order to for airlines to break this cycle and better serve customers with disabilities, they must learn the subject, improve their services and acquire the proper tools to meet the needs of our largest minority. They must invest in suitable training so that their employees know how to deal with this important segment of society.

If the airlines set an example by giving people with disabilities proper service in full view of hundreds of passengers, they will not only end the embarrassing meltdowns in services. They will play a major role in changing our society and transforming it into a more egalitarian, just, accessible and inclusive one.

Shira Ruderman is the Israel Director of the Ruderman Family Foundation, which works toward the inclusion of people with disabilities in society, in Israel and the United States.