Self-driving cars have long been the staple of sci-fi literature and movies, but you don’t have to be a sci-fi fan to notice that they have been creeping into actual news conversations more and more. From Uber facing a possible shutdown of its self-driving car program, to the recent question raised in San Francisco about regulations regarding wrongly parked self-driving cars, it is clear that this technology is no longer in the realm of fantasy. Or at least its beginning stages aren’t a fantasy. While we still don’t yet have a fully autonomous car that can get you from any point A to any point B, especially not quickly, we are already at the point where we have to seriously discuss the implications of this technology. Thanks to these discussions, the first full-speed, full mobility self-driving cars will do so much more than just drive people around.

I’m making this claim largely because we as twenty-first century consumers are used to our technologies being smoothly synchronized, personalized, and interactive. Our printers speak to our cell phones, we can order things off Amazon via voice-activated computer stations, without even needing a screen or mouse, and there are now even smart fridges that track your groceries for you(?!). But I’m also making this claim because of Olli. 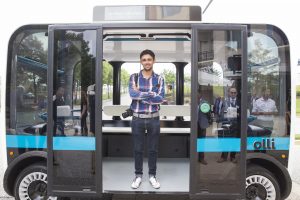 Olli is a self-driving, twelve-person shuttle which has a top speed of 30mph and is 3-D printed by Local Motors. Its tag-line is “forward-thinking transportation.” One of those forward-thinking aspects is that it’s a cognitive vehicle. Now what does that mean? “In this context it means that it’s a vehicle that already has Watson capabilities built into it,” says Erich Manser, an I.B.M. Accessibility Researcher. “Watson technology became more well known in 2011 when Watson performed well on Jeopardy. They put it up against some of the winningest players in history of Jeopardy and Watson performed very well.” As a matter of fact, in 2011, Watson, the I.B.M. computer actually won at Jeopardy, beating out human beings. It managed to do that because as Manser explains, it has “speech to text [capacity], image recognition, and text to speech [capacity]” but that’s not all. “The cognitive piece of it is when Watson encounters information it hasn’t encountered before it has ability to learn from that so that the next time it is asked for that, it has accumulated additional knowledge,” says Manser. “There [are] just huge amounts of data still being fed into Watson, in the 6 years time since Jeopardy.” Having an incredibly powerful computer like Watson in a self-driving vehicle like Olli has remarkable implications.

Most of us who use public transportation have had the experience of missing our stop on occasion. We get engrossed in a book or a podcast and find ourselves somewhere unintended. Imagine if the vehicle could recognize you, either by facial recognition or by a profile you’ve set up on your phone, and it could tell you, through your earpiece, that your stop is coming up. Olli could do that. Not only can Olli personalize the transportation experience for each user, but it enables unprecedented accessibility for users who traditionally struggle with transportation—people with disabilities. Manser gave himself as an example: “I’m someone who is visually challenged. When I board a bus or a train, unless the priority seating is available, my ability to easily continue on into the vehicle and identify where the next available seat is extremely challenging. But Olli could say, hello Erich, the seat number whatever, which is ten steps down and on your left, is free. It could give you personalized information through overhead speakers or privately in an earbud.”

I.B.M.’s commitment to accessibility is incredibly comprehensive. They conduct workshops with all members of society and elicit feedback 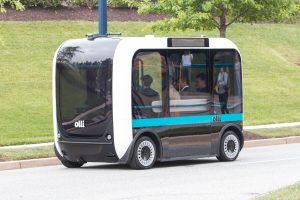 and input in terms of the user needs in order to continue improving Olli. Manser explains that when it comes to accessibility in design, “largely it’s been perceived with resentment. Like it’s something being imposed on developers. We’re working very hard on trying to change that. We’re really trying to change the conversation about accessible design so that developers view it as just good design. Accessible design is elegant design. Rather than being reactive as a team, we wanted to become more proactive and wanted to align ourselves with some real world projects.”

In terms of real-world impact, at the beginning of this year, we at the Ruderman Family Foundation, in collaboration with SAFE published a Ruderman White Paper discussing the implications of accessible and self-driving technology. Our research showed that in the U.S. alone we’d see a $19 billion savings in terms of healthcare expenses because people who normally struggle with transportation to doctor’s appointments would have access. We also concluded that two million more people would have a better chance at employment since transportation difficulties are one of the key barriers for employment for people with disabilities. While Olli isn’t ready for universal use, we are excited to learn about its possibilities. “A key to widespread adoption will be a gradual roll-out,” says Manser. And Olli is already being gradually deployed in some real-world settings. There are tests in Florida and Tennessee and it has been transporting students on a college campus in Germany.

Self-driving technology is “not something you can force on people,” says Manser. “People will need time with it and will need to see the technology proven out. By all estimates we can reasonably expect to see the numbers of traffic fatalities go down and the benefits to humanity, once they’re demonstrated and proven out, will increase rate of adoption in the mainstream. Like everything else, it will snowball,” says Manser. We look forward to see it snowball, quite possibly within some of our lifetimes.